On A Dirt Road (contemplative video)

The Unbearable Lightness of Being from Janos Kish on Vimeo.(2018/Janos Kis/Cambodia) 13'18"

There is a cow lounging on the side of a dirt road. Is it a sacred cow? This is not a postcard... the cow is ruminating patiently.  She whips her tail to chase away the flies, and shakes her large black ears. She is alone, abandonned on the side, at a distance in the frame. Not too estranged, not too familiar.

The landscape is planted there for eternity. The road, although losely defined, with patches of grass here and there, is mostly sand, stretching perfectly in the axis of the shot. A symetrical composition only distracted by the excentric position of the cow and a huge tree on the opposite side of the road, as a counterbalance. And behind the cow, a power line with dancing posts that can't seem to keep a straight posture.
The road has no end in sight it seems, as it unrolls up to the horizon, rigth into a perpendicular line of trees, which probably follows a perpendicular road. We can see, from time to time, silhouettes driving the horizon line, through the trees, from the right side to the left side and vice versa.

It's only when the first motorbike, in yellow, drives through the road, at the 3 minutes mark, that we see it slalloming in the background, following a hook on the right, behind a dense bush, then turning to the left again to exit the frame behind a row of trees. Another motorbike, all black, rides the same road at the same moment, but from the back, where we didn't see it coming in, toward us, after crossing the first motorbike.

When the yellow motorbike did its first hook, we notice something moving on the road at this place. There is in fact a second cow that was lounging and merging its grey colour with the sand, like a rock on the road. Now it is standing and moving around, we can definitely see a second cow in the distance, with a whipping tail and long black ears. She is standing right in the axis of the shot, or nearly so, presenting her profile to us. The two cows are a plastic duo. One is close, one is far. One on the left side, one on the axis. One is lounging, one is standing. One is looking at us, one is ignoring us.

This scene is reminiscent of the famous opening of Satantango (1994) where Béla Tarr and Agnes Hranitzky film cattle in an enclosure until the cows move outside in the streets of an abandonned Hungarian village. Tarr and Hranitzky slowly track down the cows as they make their way outside, like if the herd was pulling the camera with its slow locomotion.
But here, Janos Kis chose to keep a static camera (like in most of his short contemplative films), because the cows stay in place and it is the frame that defines the storyline of the shot. The composition is extremely calm and peaceful. Only brievely interrupted by the passage of bikes or trucks, whiches are merely scratching the road surface, like floating on a dirt cloud, dispersed by the wind. The immobile cows dictate a static shot. The animation of the shot comes from the intermittent crossing of vehicules along this road.

The static camera reminds of the work of the Lumière brothers (who shot only short documentaries of a single view by technical constraints, in black and white and silent of course), Andy Warhol (who used extreme long takes of the same view in black and white), James Benning (who films experimental documentaries of static shots of empty landscapes), Niklaus Geyrhalter (who is a German documentarian compiling single takes of various length of places and landscapes)...

My first thought was it must be India. But Janos confirmed me it was located outside of Siem Reap, nearby the world famous Angkor Conservation Park, in Cambodia. It is an ode to this country's peaceful landscape, of a rural back lane, almost abandonned, but still used daily by some lonely riders.

The title refers to Milan Kundera's 1984 Czech book about a handful of adulterous intellectuals living in Prague during the year 1968 when the political liberalization allowed for the Prague Spring, a period of artistic florish and protests. The book was put into film by Philip Kaufman in 1988.
Far from the intellectual romance of this book and film, the title still evokes, out of context, a Buddhist mantra, a Zen koan, which is examplified by the look at this passive cow. This unmoveable cow represents the spiritual detachment of the contemporary world full of attentions and notifications, This dirt road is the antithesis of the speedways of information, back to the roots of humanity in a simplier world, more grounded, closer to nature, more laborious than industrious, in one word pastoral.

A few words from the filmmaker Janos Kis :

"It was early morning, the sky was beautiful when I was driving my car on the dirt road and suddenly realised a cow in a picturesque background. I parked the car nearby but not very close to observe what's happening. I'm not sure how long it took but I realised this was what I was looking for. Everything looked like a painting. My camera equipment was on the backseat. I chose the lens with soft tones, perfect for the occasion. Set up the tripod, camera, microphone and was waiting for the right moment. I never just start rolling if I don't feel the time has come.

Sometimes it takes 5, 10, 15 minutes or more to wait before I start rolling, and at the end : "Did you see the angel going through?" as Lajos Koltai (HSC/ASC Cinematographer) told me once during a directing and cinematography workshop in Budapest. Istvan Szabó (Oscar winning director) used to ask frequently L. Koltai on set after an important shot.

So that day everything was at the right place in the right time. Not only the two cows, but all the motorbikes, the trucks, even the birds and the pagoda music from the distance. I just had to wait for an Angel and cut.

I hardly cut even the beginning or the end of my film's if not necessaries nor do I color correct them. As for all my films, this one is shot on a Pro Canon DSLR camera with the appropiate lenses and I used a Pro Rode shotgun mic.

The most difficult thing is when shooting extreme long takes outdoor the lighting is constantly changing.
My films are shorts but very slow, a kind of Zen films. All the stories have beginning, middle and end within an invisible timeline.
The storyline is written by the life itself. I'm not directing the film in the classical meaning of the word. I'm just a messenger.

The audience must be very much devoted. As the respected director Bela Tarr used to say "They must make their decisions at the first few minutes they leave, or stay and watch the film till the end."


Find more of Janos Kis's short contemplative films on Vimeo and on YouTube.
His blog is JanosKisPhotoAndVideography 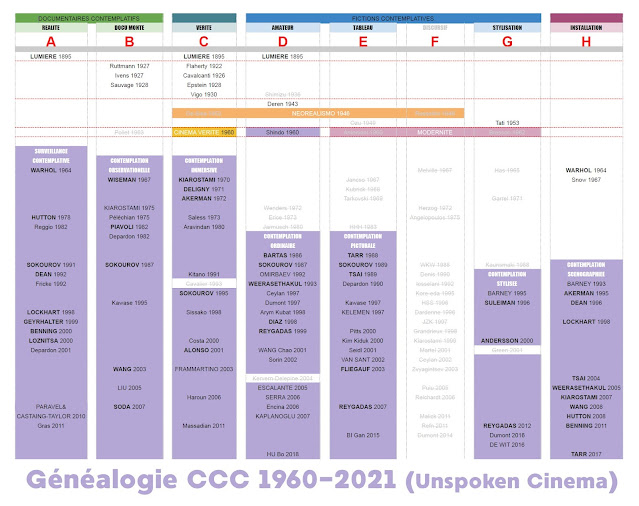