Showing posts from January, 2008
Show all

By HarryTuttle - January 30, 2008
Roy Andersson interviewed at Cannes 2007 (video on Arte website) for Du Levende / You, the living On narration : "With Songs from the Second Floor , I wished to break with the traditional linear storytelling, I was so tired with it, so bored. So I decided to make a movie about the human being, all individuals together who represent the human being. I'm telling a story through many persons instead of a few lead protagonists." On camerawork : "Approximately 20 years ago I realized commercial filmmaking was going to an end, and I considered stopping making movies altogether. I'm a fan of the Italian neo-realism , and documentaries. I found a way to cleanse filmmaking and condense towards more abstraction. I stopped to move the camera, to cut scenes, back to a simple way to make films, like Lumière, Chaplin, very very simple. Also I was very impressed by the Spectator Theory of French critic André Bazin : the audience should have the possibility to decide what&
Post a Comment
Read more

By Carlos Ferrao - January 29, 2008
In film there is an illusion of present time; events happen on the screen and we take them as happening in the now, not in the past when they were shot. A spectator is encouraged to acknowledge the onscreen action as a sort of live broadcast from some other place. Editing, dialogue, acting and choice of shots help to create this very effective illusion. In fact, scripts are written in the present tense, for example: EXT. WEST SIDE HIGHWAY — NIGHT A black dog sleeps on the shoulder of the highway, head between his paws, curled up next to the barricade that separates the north and southbound lanes. Traffic rumbles past him: yellow cabs, blue police cruisers, white limousines with tinted glass and Jersey plates. We hear the squeal of brakes. A black '65 Ford Mustang, mint condition, pulls onto the shoulder, ten yards past the dog, and backs up. The dog raises its head. Two men step out of the car. The driver, MONTY BROGAN, midtwenties, is pale-skinned in the flickering light. A sm
1 comment
Read more

I thought that there was a couple more of late contributions to arrive, but since I announced a week-long duration, let's close it (the blogathon, not the blog!), temporarily at least. Please don't give up on your contributions if you still want to post them. The CCC discussion is non-stop. The second Contemplative blogathon only lasted 1 week this year, but it was almost as big ( 36 contributions !) as last year in 3 weeks ( 47 contributions ), topping my most optimistic hopes. So thank you all very much for your generous participation once again. Full table of content for the blogathon 2008 here . It is a (good) surprise to see more new faces this year. I thought we'd be only among old timers from the first blogathon, because this topic is boring everyone. So thanks a lot for joining in numbers this year again. We're up to 34 members now, with 8 new members. The contributions have been exceptionally rich and varied. It's great to read all this. I'm sorry I di
5 comments
Read more 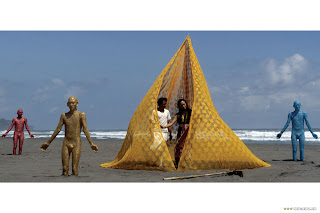 Opera Jawa (2006/Garin Nugroho/Indonesia) IMDb First a rhetorical joust of journalistic quote encapsulation (if you can't nail the entire film in a single all-encompassed catchy phrase you're not a real critic, or at least your editor will not greenlight the review...) : Jeannette Catsoulis ( NYT ) : " A colorful and confounding head trip, “Opera Jawa” is guaranteed to test the fortitude of all but the most adventurous viewer ." Olaf Möller ( Film Comment, Cinema Scope ) : " honest-to-God masterpiece of mad invention " Jonathan Rosenbaum ( The Chicago Reader ) : " audacious, undeniably challenging, in fact downright mind-boggling avant-garde masterpiece (...) dazzling bolt from the blue - something to see and savor again " Jesse Zigelstein ( LA Times ) : " A spirit of political protest surges through Opera Jawa, which acknowledges Indonesia's troubled past and explicitly dedicates itself to victims of violence, tyranny, and natural disas
9 comments
Read more

Romney on the Contemplative trend

By HarryTuttle - January 14, 2008
(This is a great article recommended by Celinejulie ) Are You Sitting Comfortably? by Jonathan Romney, The Guardian (October 7, 2000) . Here are some highlights regarding CCC : "The film in question was Satantango , made in 1994 by the Hungarian director Bela Tarr, and something of a legend among aficionados of painstakingly slow European art cinema. A film that long and that sombre is not likely to become an international art-house hit along the lines of Jean de Florette , or even to find a comfortable slot on the festival circuit. But Tarr's film has a reputation as something more than a lugubrious oddity of monstrous proportions - it is a powerful, visionary piece of cinema that creates its own stark world and keeps the viewer compellingly locked in for its duration. (...) his most recent film Werckmeister Harmonies recently caused a stir at the Edinburgh Film Festival, where viewers received it as a genuine cinematic UFO. Filmed in Tarr's characteristic slow, anal
3 comments
Read more

By HarryTuttle - January 13, 2008
Continuation of : The Root of Mutism My notes on Antony Fiant's essay in Trafic , which first made me believe in CCC. This is a virtual manifesto for Contemporary Contemplative Cinema! I wanted to post it at last year's Blogathon, and I barely make it before this one ends... I wish it was translated in English somewhere and accessible online. Des Films Gueule de bois (hangover films) Notes on the mutism in contemporary cinema (by Antony Fiant, Trafic #50, 2004) "Not being submitted to the dictatorship of speech, being able to give in to the stream of images and sounds representing heterogeneous worlds, gives faith again in the art of cinema in this context of serious scepticism over its capacity of renewal. (Antony Fiant)" Antony Fiant realized all the recent films he loved had all one thing in common : mutism. According to him, the domination of speech pushes aback the cinematic form and the use of sound. Definitely against theatre and literature, these filmma
Post a Comment
Read more

By HarryTuttle - January 12, 2008
This is an article Adrian Martin sent for publication in the blogathon : Chantal Akerman: Walking Woman (Notes from an unfinished essay, 1998) by Adrian Martin Godard: " The drama is thus no longer psychological, but plastic ... " Antonioni: " It's the same thing ." (Cahiers du Cinéma, 1964) There is a film history, as yet unwritten, of walking. Several releases of the late ‘90s have contained some impressive strides – Chow Yun-Fat silently entering a room, shot from behind at a low angle and in slow-motion, about to do his efficient killing work in The Replacement Killers ; or Pam Grier as the heroine of Jackie Brown , whose every determined step takes her closer, pushes her deeper into the space of a murky intrigue. Hollywood's neo-romantic comedies still make use of the crowning walk that, after a flash of mental revelation, transforms itself into the handy, frantic, last-minute dash to retrieve a departing beloved. Further back, Michael Powell an
4 comments
Read more

On Pointing the Camera

By David McDougall - January 11, 2008
"Before familiarity can turn into awareness, the familiar must be stripped of its inconspicuousness; we must give up assuming that the object in question needs no explanation. However frequently recurrent, modest, vulgar it may be, it will now be labeled as something unusual." - Bertolt Brecht cross-posted to Chained to the Cinémathèque
2 comments
Read more

By HarryTuttle - January 11, 2008
Jmac posted an interesting comment in the post on non-narrative criticism, and on her blog (and here too). The point is that when we say that CCC is "non-narrative", we are refering to a "mainstream norm" by contrast, by antithesis, in a negative opposition. So this is the same issue we are currently discussing in the first roundtable ( CCC synopsis ). Let's talk about this issue here. How could we describe CCC in a positive way, narrativewise. What term would better express what CCC does (instead of what it doesn't). Jmac suggests the word " experiential ". What do you think? And what are your own propositions? Subscribe to the RSS feed for the comments of this post to follow the discussion here.
18 comments
Read more

The Root of Mutism

By HarryTuttle - January 09, 2008
Silent protagonists in CCC Why nobody talks? Is it because they can't (natural causes, mental illness, language barrier, vow of silence...) or because they won't (alienation, asociability, incommunicability...)? I thought there was more actual mute people but only a few use this excuse to justify the absence of dialogue ( A Scene At The Sea, Oasis, The Arc ...). Or maybe there is nobody around to talk to. After a quick survey there seems to be equal numbers of "can't" (mainly mental disorder or language barrier) and "won't" (mainly physical isolation and social shyness). Often the auteurs manage a very Spartan environment for their protagonists, in such a way that isolates them in desertic areas or keep them apart from the rest of the community. There are many reasons to this mutism, sometimes an abstracted, "conceited" setting that render dialogue superfluous, but other times the silence is more uncomfortable because the interpersonal re
7 comments
Read more

By HarryTuttle - January 07, 2008
To pursue the issue debated by Rosenbaum and Durgnat in the text recommended by Adrian Martin earlier ( Obscure Objects of Desire: A Jam Session on Non-Narrative ) I propose our first roundtable would take a look at how CCC is "summarized" and sold to the readers in today's press in the form of short capsules, press kit synopsis, or year-end statements. Please post the best and the worst of what you've read this year on the recent CCC films. Just a few lines. When the author is pressed to extract the "essence" of the film in just a few words. What are the main elements used to represent a "plotless" film. Do they go for an atmospherical suggestion, or try hard to give minor plot points? Do they talk about the form or the content? Do they recommend/diss it for its atmosphere or for its length or for its plastic beauty or for its confused story? Post anything, whether it comes from the distributor, the auteur in an interview, or from critics in the
22 comments
Read more
More posts