Showing posts from January, 2010
Show all

The Limits Of Control 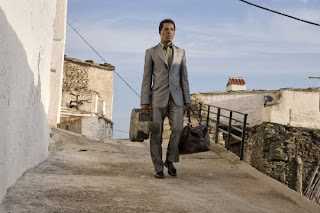 If I had to resort to one of those crude movie equations to describe Jim Jarmusch’s The Limits of Control (2009), it would have to be “Quentin Tarantino minus the hyperkinetics”. Studded with a plethora of movie references, Jarmusch’s movie is a film buff’s dream, literally. In some ways, Jarmusch is like Pedro Almodóvar, who has been consistently accused of being apolitical in his movies (Is it a mere coincidence that The Limits of Control is based and shot in Spain?). But a little investigation shows that the very nature of Almodóvar’s films – with their explicitness of ideas and visuals – reinforces the difference between contemporary Spain and Francoist Spain and, in the process, draws a portrait of a country that has come a long way since those oppressive years. Jarmusch’s cinema, too, does not exist in vacuum. With their plotless scripts and unhurried pacing, his movies are the perfect antidote to the summer blockbuster of Hollywood. These films have been relentlessly repudiating
7 comments
Read more
More posts