Showing posts from August, 2009
Show all

A Song of Growing up Delivered from Fear

By HarryTuttle - August 12, 2009
On behalf of Yvette Biró I post her review of Claudia Llosa's film : La Teta Asustada / The milk of sorrow (2009/Peru) A Song of Growing up Delivered from Fear Winner of the Golden Bear, the Best Actress and the International Critics Prize in Berlin 2009 There is a prologue to this beautiful film. A saddened young woman accompanies her mother to death. Before saying farewell, the mother sings a terrible, ageless song of horror and sufferings she underwent while bearing this child in her womb: violent rapes, experiences of cruelties she transmitted to the girl with the milk from her breath. Therefore the malady she is afflicted with: “La teta asustada” [the milk of sorrow] - as the folkway name it. Fausta, the heroine is marked by fear, unable to speak, to be touched by anybody. “She is the metaphor of a torn country…which has known repression and can’t express itself only through which is hidden in the unconscious: the myths, terror, and its traumatisms.” – says the au
2 comments
Read more

The Films of Artavazd Peleshian 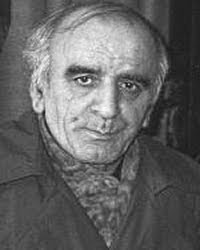 Watching Atravazd Peleshian’s movies, I had this constant feeling of having seen such films elsewhere. A little deliberation reveals that the extraordinary Jean-Luc Godard compilation History of Cinema (1988-98) is, in fact, closer to the works of this Armenian auteur than anyone else’s. Furthermore, it becomes clear that almost all of Godard’s films made in the past couple of decades, especially the many short films, have a notable influence of Peleshian’s style, although they evidently bear Godard’s signature. With a total runtime of hardly three hours, Peleshian’s filmography may not be as prolific as the French director's, but it shows such degree of consistency of style and unity of content that it almost feels as if Peleshian had decided beforehand what his résumé would read. I guess Peleshian’s films are what could be truly called film poetry. This is because they completely wallow in ambiguity that is so essential to poetry. By ambiguity, I do not mean that they elude meani
2 comments
Read more
More posts