Showing posts from October, 2009
Show all

By HarryTuttle - October 29, 2009
Lost in a moment  | Shrift (1998/Dennis Wheatley/Stefan McClean) 4'56" "one take impromptu film made in Tokyo by Dennis Wheatley and Stefan McClean. We were sitting in this sushi bar pondering how best to set up a camera to film things all by itself whilst we were in Tokyo. Take our hands out of the equation... let the camera have its own journey. I'd taken a cannibalised record turntable with me from the UK with the idea of filming slow panoramas but it was painfully bumpy and stopped every minute. Then we had our eureka moment and filmed this. A few years later I was working on a piece of music and married the two together. The music is all about that feeling when you're half asleep in the sun.. the ambiance of foreign voices becomes a lullaby to dream away. There's something beautiful in not understanding a language.. it becomes abstract, musical. Opera is so much better when you can't understand the words! What we loved about watching this f
Post a Comment
Read more 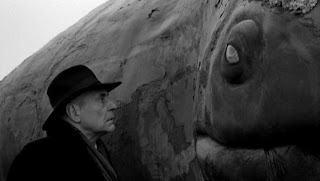 Pick up the ordinary film that chronicles the rise of fascism prior to the second world war and you know what to expect – a nation penalized for the first war, a corporal in resentment, his becoming a key figure, formation of ideology, those mesmerizing speeches, rise to power and finally, the ruthless extermination of humans. Well, you know the routine. Rare is the case that such a film is historically inaccurate or morally flawed, but what is troubling is that a single person is made the focal point of such monumental passages of history – as if satisfying our need for a villain as we do for a hero. Not that I am in defense of any such individual, but how on earth can a single person independently cause the galvanization of a whole nation? However convincing his words and however significant his moves are, it is finally the mass and the intentions that run through it that make it possible. From what can be seen as an adversarial position, Béla Tarr’s Werckmeister Harmonies (2000) chi
1 comment
Read more