Showing posts from February, 2009
Show all

Wang Bing on Real and Fiction

By HarryTuttle - February 24, 2009
A new video added to the " Where is cinema heading to? " series from the Centre Pompidou event (see the other videos already posted here ) : Wang Bing, who filmed the 9h long documentary, Tiexi Qu : West of Tracks (2003). Wang Bing, où va le cinéma ? envoyé par centrepompidou Real and Fiction "When I make a film, of course, I tell a story. In fact, while telling this story, I am one of its participants. Storytellers, the artists, used to have a certain influence on the audience. But personally I don't want to endorse this role. This vocabulary implies the notion of impartiality and truth. I have a hard time to situate my work. No matter how a film tells a story, it's very difficult to close in on the truth. During one's life, there are times when things are hard to grasp. We can't handle them. Every filmmaker has trouble being impartial during the creative process, or even... being true to oneself. I think it's very difficult. It's somethin
Post a Comment
Read more

By HarryTuttle - February 22, 2009
Mobile Men is a short film by Apichatpong Weerasethakul, one of 22 (3 minutes long) segments from the omnibus called Stories on Human Rights (2008/Russia/Germany), in honor of the 60th anniversary of the Universal Declaration of Human Rights. This initiative was born under the auspices of the UNITED NATIONS HIGH COMMISSIONER FOR HUMAN RIGHTS and was made possible thanks to the support of the EUROPEAN UNION, the FRENCH MINISTRY OF FOREIGN AND EUROPEAN AFFAIRS - FRANCE, the FRENCHE MINISTRY OF CULTURE AND COMMUNICATION - CNC and SESC São Paulo, Brazil. Created and produced by ART for The World , Stories on Human Rights is the first film project on such large scale bringing together filmmakers and artists, using the universal language of art to tell stories through six themes that capture the ideals enshrined in the Universal Declaration: culture, development, dignity and justice, environment, gender and participation. Find all the other shorts by Walter Salles, Marina Abramovic, Jia
2 comments
Read more 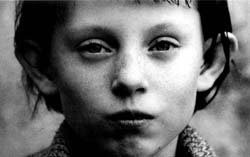 Yesterday, was the 15th anniversary of Béla Tarr's greatest masterpiece, Sátántangó , which world première was held on February 8th 1994 in Hungary. Jonathan Rosenbaum wrote an article on this occasion for a Hungarian newspaper and it is published on his website too. Read it online here . According to IMDb , it has been screened in only 7 countries (at festivals), of which only 3 gave it a (limited) commercial distribution. Hungary and The Netherlands in 1994, and France in 2003. I hope this info is incomplete. I believe there was a couple of exceptional screenings in NYC a few years ago. Let me know where and how you could discover this rare and epic film yourself, if you had the chance to experience it.
15 comments
Read more

After some minor delays, UNSPOKEN journal is back in ignition, with a new extended deadline and a new guest-editor too. The list of confirmed contributors is looking good, but the call is still open––as a last call––to all. + + + Dear Unspoken Contributor, We are delighted that you have expressed interest in contributing to the debut issue of UNSPOKEN. As you will already know this issue is dedicated to the great Béla Tarr. But we are equally happy to announce Yvette Bíro, esteemed screenwriter and peer of Tarr, as our guest-editor. Bíro's writings and films chart a startlingly lucid and compelling course through aesthetic and philosophical landscapes. UNSPOKEN is inspired by such explorations and seeks further adventures of this uncharted cinematic and theoretical terrain. Advice and what we need from you: Confirmation If you have not done so already, please provide in an email your chosen topic with a title (and abstract of 250 words if possible), and a short biography f
Post a Comment
Read more
More posts