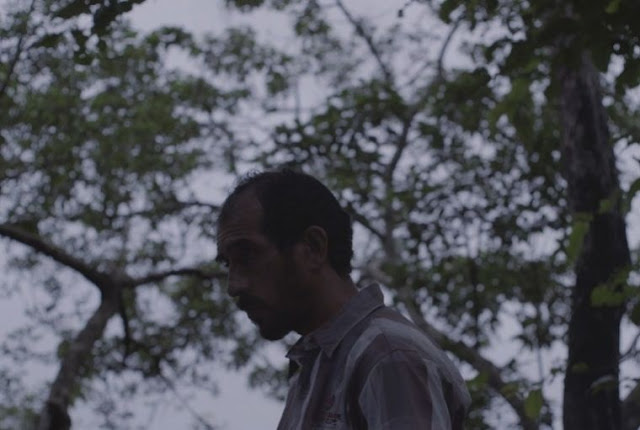 Opening sequence : It’s pouring down. The screen is all green, or rather greyish, filled with a rain-soaked jungle. On the foreground a man in raincoat stands there, looking off screen, a roll of wire in hand. Is he Pedro ? He adresses someone offscreen, in the upper left corner. This static shot shows a sinuous road going away, far out of focus, where from a red van drives in. The van pulls over in midground, and a voice starts bossing around the two drenched men. That voice belongs to the landowner sitting on the passenger’s seat. Pedro finally enters the frame right, as the van drives off. The titular character makes a delayed entrance, and let us guess his identity amongst the multiple possible candidates on screen. The two men left on their own device, under a deluge, climb on a motorbike and ride into the next shot.

In one statement-shot (just under 5min long), the young Natesh HEGDE introduces the entire universe of the film : 4 main male characters and their relationship. Pedro and his friend Raju in the rain tending to a power post on one hand. The landowner and Pedro’s brother, commanditing labor from the confort of the van interior on the other hand. A struggle of classes and a struggle of power. Van versus moto, dry versus wet, road versus jungle. Not only the audience lands in this film softly, feeling the contemplative journey they embark on, but the film itself sows clues to set up the strange hierarchy characterising this quartet of villagers.

Following up, a bus shelter, center stage, plants a film landmark that will come back ever so often with the same framing. The motorbike parks there at a Y junction, Pedro heads off on foot into the background while the other continues on behind the camera.


Pedro is an electrical handyman who fixes the power lines whenever there is a shortcut or a power outage in the region. A man of few words, if any, who does his thankless job with a certain pride and without ever complaing. He lives together with Julie, her mother and her son Vinnu in one tiny house with tin roof.

This apparent peaceful life will be threatened in the 4th shot by the sudden appearance in the night, of a menacing shadow. A dangly silhouette outside casts a shadow on the transluscent door, dancing the drunken dance like a dismantled puppet. We are inside the house, everybody plays dead, hoping the intruder will believe nobody’s home.

Outside (we’ll see in the following shot), Pedro’s brother, drunk out of his mind, projects a barrage of invectives at this screen-door. He demands his house back, along with his wife and son… We learn through this unfortunate incident (and other clues later in the film) that Pedro is in fact living a disolute relationship with his sister-in-law, who threw her husband out on the count of his impotency. 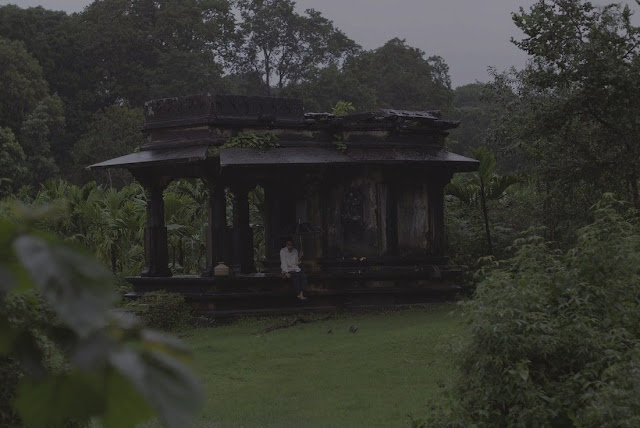 One of the nodal points of this story is the matter of filiation : the feeling of belonging in spite of blood kinship, and the comparison between fathering a baby and raising a child (a subject more amply explored in Koreeda’s Like Father, Like Son). Especially since Natesh HEGDE makes it a personnal subject (by casting his own father as Pedro, the surrogate father, by giving his own name to Hegde, the landowner and probable real father of Vinnu).


Another key to the story is the dread of a mob mentality in a small village, where everybody knows eachother, where everyone sticks together… until one of them gets a bad reputation, evicted from the community. This outlier could have been his brother, Bastyava, but with a twist of fortune will be Pedro ! And all his neighbours will turn against him following in the steps of Hegde’s anger.


In a matter of a couple days, Pedro is promoted patrol guard to look after the fence of the property with his faithful dog, Motu, warding off monkeys and boars. This promotion will be the sign of his disgrace as if he didn’t deserve any job above his pay grade. He’s handed over the rifle attached to the position in a 3 min long static shot : Pedro, on the backseat of the van, is listening to Hegde’s speech offscreen, without uttering a word.

The twist of fortune at the origin of a man’s downfall will be the disappearance of his dog. Pedro attributes it to a wild boar and sets off to track it down and kill it with his rifle… After getting drunk at the local bar with a friend, and some more booze at a camp fire in the middle of the jungle, he leaves alone, stagerring in the night, with a headlight scanning the trees franticaly. Nothing good can come out of this…

Against the image of an empty jungle at night, the sound of a distant gunshot. Next frame, Pedro is racing through the trees. Something bad happened. But Natesh HEGDE will not show the acts of violence on screen, only their consequences, which is a very Bressonian move (and makes the shooting easier and cheaper I guess !) In the following images (suddenly cutting much faster at the 43’ mark indicating the interruption of contemplation by the urgency of the situation), hooves are tightened to a rope, and a rope is pulled by hands in extreme close ups. They look more like cow’s hooves but we never know…


In an interview with Le Polyester Natesh HEGDE cites Bresson, Kiarostami, Ghatak, Hou Hsiao-hsien, Aravindan and Reygadas as his influences.
If I had to pick which of their films inspired the making of Pedro, I’d say, respectively : Mouchette and L’argent (for the Bressonian close ups, the wandering of the protagonists and their social ostracism) ; Close Up (for the outsider protagonist who begs to fit in through improper behaviors) ; The Cloud-Capped Star (for the self-sacrifice of the protagonist for her family) ; Goodbye South, Goodbye (for the battling bullies in a rural area) ; Chidambaram (for the languid ménage à trois) ; Batalla en el cielo (for the infernal social descent of a loner).

But I also see the jungle (day and night) of Weerasethakul (Tropical Malady, Uncle Boonmee), and the rainy menage à trois of Tarr’s Damnation.


With Pedro on the run, Bastyava is ready to take over his former life ! Backed up by the boss, Hegde, who launghed a region-wide manhunt, the brother-in-law finds his place, forcefully, amongst his people. And Pedro has to fight his way back into the community, who might receive him with a cold heart…


One of the last images of the film features a tour de force of a plan sequence (5 min long). Pedro and Raju walk slowly throughout the frame, from foreground to background, via the left offscreen. Once Pedro is atop another power post, as usual, Raju makes his way back followed by the camera, which sends Pedro and his post offscreen, ending on Raju alone, making a grim phonecall...

The film warps up with the towering image of a giant power pylon, unlike we’ve ever seen, placing the film back into the industrial age where there is no place for a job like Pedro’s.