Natesh HEGDE comes from a small village of the Western Ghats in Karnataka in India (south of Mumbai). He studied journalism at the university of Karnataka in Dharwad. He is director, screenwriter and editor on his first film. He is a young self-taught prodigy who made the remarkable Pedro, his debut feature, which premiered very recently at the Busan International Film Festival (South Korea) on the 9th of October 2021. The next week it was selected at the BFI London Film Festival (UK). Again a week after that at the Pingyao International Film Festival (China) where he won the Roberto Rossellini award for best director ! Before going to the Taipei Golden Horse Film Festival (Taiwan) on November 12th. And I saw it in Nantes in competition at the 3 continents festival (France) on November 21st, where it won the Silver Montgolfière (ex-aequo with another Indian film : Shankar’s Fairies). Read my review of the film Pedro over here.

He tells a fictionised story based on biographical elements of his own father life, who plays the title role. 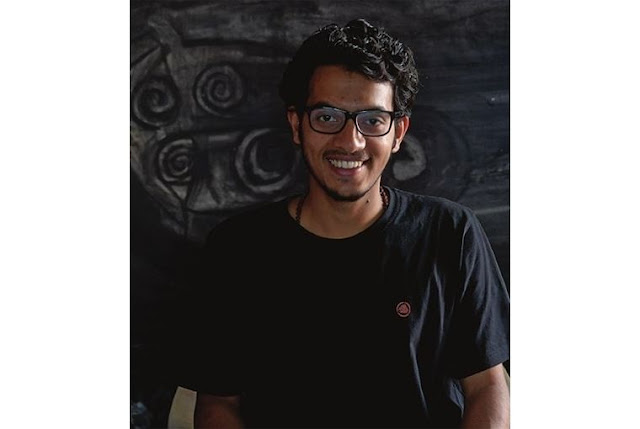 UNSPOKEN CINEMA : How old were you when you started to work on this first feature film, and how long did it take to complete ?

Natesh HEGDE: I was 24 when we shot the film. It took one year for postproduction and another year we waited due to covid.

UC : Can you talk about the two short films (Kurli and Distant) you made before Pedro ? Especially their form in comparison to Pedro.

NH : Kurli was made in 2017 and that was the first time I touched a camera. I think there is a continuity not only in the theme but also in the approach of making films.

UC : Your shots are carefully conceived and well composed, also deliberately paced, which shows confidence and maturity. When did you decide to become a filmmaker ? Who helped you learn the trade so fast ?

NH : I don’t know when exactly I decided to be a filmmaker but it was Kiarostami’s Close Up that really affected me when I watched it the first time.

I never assisted anyone or attended film school or workshops. I learnt filmmaking by watching the films and thinking about the medium. I’m from a village especially from a farmers family, my father or grandfather never taught me how to plant a tree. I learnt it by observing and I feel the same about filmmaking.

UC : You say the scenario was inspired by real people and real events, in a village you’re quite familiar with. Do you follow the saying : « Film what you know » ?

NH : Yes, also film what you feel and imagine. Anyway the things you know will flow into the film consiously or subconsiouly. But Film what you know must not be exoticism.

UC : Pedro as a work in progress, was present at the Film Bazaar 2019. At what stage was it then, and what kind of help did you get on the film other than financial prizes ?

NH : We were in the final stage of edit, the editing mentorship helped us to understand what people are thinking about the film. Also after Film Bazaar the anticipation towards the film grew significantly.

UC : I suppose your father (Gopal Hegde playing Pedro), was not a professional actor, like the rest of the villagers. Was there any professional actors on set ? And how was the difference to direct them in both cases ?

NH : There were two professional actors. Julie played by Medini KELAMANE and the tea shop owner Raj B. SHETTY.

But I approach both in same manner or I don’t have a method. Its spontaneous and based on the situations.

With my father I felt the ease of working. And only we both knew from where the scene is coming from. It was tough for him but he was brave enough to relive some bitter moments of our life.

UC : More precisely, how do you direct people to look contemplative on screen without them losing their composure ?

NH : As I already said, I don’t have a method. When the actors trust you or you make them realise that there is a truthfulness in the expression they can act. It’s dependent on what you write and how you approch the acting. They may not be able to do something like what we see in popular cinema.

UC : Did you show the finished film in the real village depicted in the film, and what did the cast think of them being in an artfilm rather than a typical Sandalwood melodrama from Bangalore ?

NH : Noone watched the film yet including my father. I want them to experience it on the big screen. I don’t know how they will react but if they surrender themselves to the film I’m sure they will experience something unique.

UC : I note you’re credited for screenplay, direction and share editing with Paresh Kamdar. Your D.P. was Vikas Urs and your sound designer Shreyank Nanjappa. Who had the most experience on set and did you work as a creative team ?

NH : Paresh KAMDAR was the most experienced, he edited films of Kumar SAHANI and worked with Mani KAUL but he was not on the sets of my film. For me and Vikas it’s a first feature. Shreyank did some work before but not the whole sound recording, foley and designing.

UC : Rain is an integer part of the region and this landscape it seems. Didn’t you make your life harder to shoot under continual rainy conditions ? Did you resort to artificial rain drops or did you wait for the rain to fall ?

NH : We shot the film in western Ghats of Karnataka and that too in the floods. In past 20 years that year recorded the highest rain. We never used artificial rain.

Sometimes we were scared to death while stuck in the rain and wind.

But that’s why the nature is an integral part of the film. You can’t imagine the same impact of the film without the rain. We waited for a suitable amount of rain for the scenes.

UC : How did you get the fantastic idea for the (very Bressonian) « door-shadow » scene ? Was there at any point consideration to repeat it when Pedro comes back drunken himself, for contrast and humour ?

NH : That’s how I imagined the scene. I don’t like to tell the thing or explain the situation or character. I tried to make viewer also feel what the character is feeling through framing sound and other tools of cinema.

The Pedro drunken scene was not at all for humour. The sequence shows what has happened with him.

UC : Is there a reason behind the choice of the name Pedro ? And why give your own name to the antagonist ?

NH : Pedro is a common name for a person from christian community. HEGDE is the surname of the upper cast community, I am also coming from the same community. (I don’t think there is an antagonist in the film)

UC : By casting your own father as Pedro, the surrogate father, by giving your own name to Hegde, the landowner and probable real father of Vinnu, do you invest a bit of yourself in Vinnu, the boy torn apart by 3 fathers ? And why is he a secondary (non-speaking) character if he represents your alterego ?

NH : Vinnu is not my alterego.

Maybe the whole cinema is my alterego. Every character has traits of me.

UC : Rain, shower, rice paddy, mud… Why so much water in your film ? Does it depict the monsoon season or is it always as such ?

NH : It’s not about showing a season. I don’t know why there is so much water in the film. To compensate for the lack of warmth in the film !

UC : What is the ASL (Average Shot Length) of the film ? (=Runtime / number of shots) It’s remarkably high for a debut film, where did you learn to edit in such a courageous manner ?

NH : The average shot length will be 1 or 1.5 minutes. That was the design of the film. We shot the film this way so there was not many option to edit it in other way. And there is a narrative also developing but through visuals and sound.

UC : This film is made primarily of long plan-sequences, deliberately paced. When do you decide to cut a shot ? In the scenario, during shooting or on the editing table ?

NH : There was no scope for cutting it, trimming it on the editing table. We decided it on the shoot.

But in edit Paresh KAMDAR brought a focus to the narrative and uniformity in the design. We eliminated a few scenes completely.

UC : In the process of making this film, which was easier ? to shoot long plan sequences or to edit them all together ?

NH : I don’t say neither was easier but was fulfilling experience. Maybe for that reason we want to make another film.

UC : Have you heard of Contemplative Cinema (or Slow Cinema) ? Do you feel part of this family ? If not, what is the aesthetic you aim to achieve ?

NH : I don’t know where I belong, it’s audience and critics who must decide. But I want to achieve what I felt after watching L’Argent or Close Up or Andrei Rublev.

UC : Your mise-en-scène of particular shots that avoid showing violence on screen is very clever ! And not always with the same technique. Once with sound instead of image. Once with consequences only. Once with offscreen space. Once with a pudic look away of the camera. How did you form these ideas ?

NH : It’s the delicacy in telling that makes the film interesting. Its always crucial what you hide and what you reveal.

UC : Which film would you want to screen (before or after your film Pedro) in a double bill feature ?

UC : You declared in Variety, back in Busan, working on « an adaptation of a short story by Kannada writer Amaresh Nugudoni and another about the partition of a family ». Do you already have a style in mind ? Will it follow suits with Pedro, or will you adapt the form to the material ?

NH : I’m not conscious about the style. It’s my sensibility from which this form derived.

I’m just taking the broader plot from the original story and adding, twisting, making lot of changes to it. In my mind it’s looking like a companion piece, I believe we tell the same story again and again.