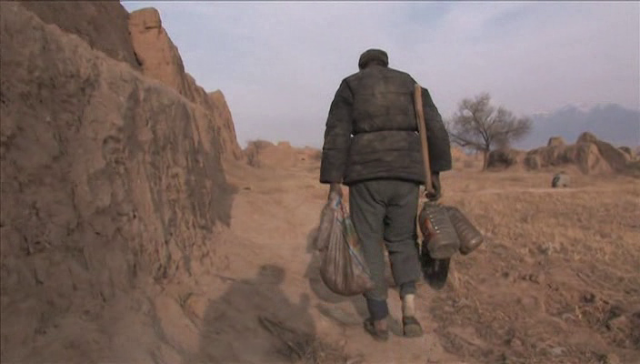 Opening sequence
After a brief landscape shot of an arid countryside covered by a thin snow where an abandonned house made of earth stands, in close up, a man with the dirty face of a miner extracts himself from the fracture of a dry mud hill as if he exited a coal shaft, smoking a home-made cigarette. He walks off on the snowy roads with empty bags under his arm.
On the dirt path, frail but poised, now carrying two heavy bags strapped with ropes on his back. He walks a long time on snowy roads. He then empties the bags full of earth in the middle of a snowy field and starts to stomp the fresh mount flat. On his way back, he picks up dried horses dungs with his bare hands in the middle of the road to fill up his empty bags.

A caveman in modern times
This old man, starring in every shots, comes out as a rural vagabond, a loner abandonned by all, who lives like a stray dog into his hole in the ground. He is a castaway surviving from a wreckage like Robert Redford in All is Lost (2013) or the animation The Red Turtle (2016). In both cases, these men strive to make do with whatever there is available to survive the next day.

Our foremost sentiment is : « this life must be abominable ». Without home, without family, without friends, without warmth, without food, without clean water, without clean clothes, without hygiene… He lives a primitive life in a desertic area, away from civilisation, far from humanity. But soon we learn more about his habits, his way of life. He keeps himself busy all day long, running errands only himself knows about.

The man with no tool
With only hands and feet to his toolbox, he walks about and deals with the difficulties of a life we can imagine full of struggle. This troglodyte ermit seems to live in the Stone Age, until we discover he’s got a cast iron pot (cut off like the barber platter of Don Quixote), matches and tobacco, plastic bottles, clothes and blankets… useful remnants from a past life or useless left overs from the consummerist society. Either way they seem indispensible to accomplish the most basic things, like carrying water, starting a fire, cooking something hot, keeping himself warm and sealing the door opening shut… His shovel and his hoe are a treasure without which agrarian labor would be impossible. Yet, he grows maize and vegetables in a nearby dusty field where nothing should grow.

Thriving with skills
This incredible man must have been a skillful peasant in a former life. He knows what he’s doing, whatever that might be. He shovels with ease and precision. He cuts out the weed with an economy of moves. He inspects the growing maize like his own children. The patient film invites us to revise this preconceived idea of a lost caveman. Scene after scene, recorded at different moments of the day, different moments of his daily life, the contemplative documentary pieces together the substential patches of a wordless puzzle : the mystery of his existence in the first place. Who is he ? Where does he come from ? How did he get there ? But WANG Bing eshews any facile explanation (not even a final title card), any sort of judgmental statement that would force our opinion. This man is only what’s left of him on screen, extended portions of his life, unredacted, shared with candor and an infinite kindness.

Agnès Varda filmed the events leading to the tragic death of vagabond in Sans toit ni loi (1985), and how little people who met her knew about her life...

Empathy without word
This man’s resilience is amazing. His face, weathered by age and carelessness, shows no sign of pain or worry or impatience… He doesn’t seem to be angry inside, certainly not outwardly. The only hint of violence I could detect was a low shout when he slipped on a mud puddle making him lose his balance for a second. After a prompt recovery he threw whatever he had in his hand to the ground where he failed to fall down. Like Yves in Le moindre geste (1971), when he was kept prisonner for a moment by the other boy. After escaping, he threw a tantrum at the door instead of naturally directing his anger toward the boy. 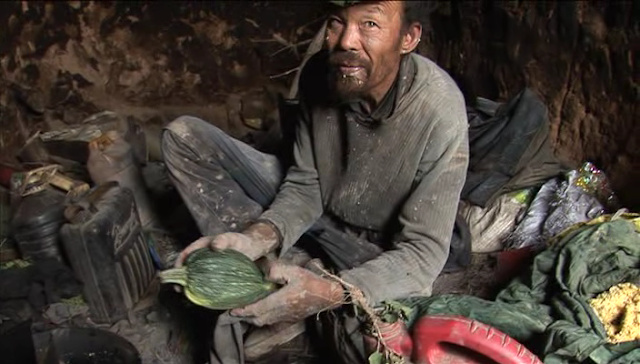 The dust gardener
Stranded in a remote location, in a wasteland North of Beijing, dust is all surrounding him. He sleeps in dust, he eats dust, he wears dust, he carries dust, he moves dust around from one place to another… and cultivates in dust. His innocuous errands, formerly bizarre and incomprehensible, are little by little becoming obvious. He’s growing vegetable in the desert. Is he mad or is he a genius ? He has the same impetuous as The Man Who Planted Trees (1987), this selfless desire to restore Nature where there is none. Although he plants for his own subsistance, this hard labor is laudable. By the end of the film, he manages to collect a few squash and corn, with great pride. Maybe the only camera address in the film, he throw a quick glance at WANG Bing after cleaning off the mud on a beautifully round zuchini, and before slicing it up with a pair of scissors.

The film series on destitutes
In Fengming (2007, the interview documentary) and The Ditch (2010, the fictionized adaptation), WANG Bing was capturing and directing the testimony on a reeducation camp in the Gobi desert, where people were sent to live underground, in dust holes, with forced labor and humiliations. These men lived collectively, under duress, like The Man With No Name, who doesn’t seem to be coerced by anyone.

This present documentary relativises the fate of the Three Sisters (2012) abandonned by their both parents in a small mountainous farm village, which seemed the lowest depths of poverty by then.

Likewise the life of this Father and Sons (2014), staying in their garage-house with TV, was another facet of urban destitutes. WANG Bing searches for the hints of basic humanity in Chinese pauperism and emptiness.

Misery with no name
The fact this man bears no name, as the film title suggests its main argument, and since he utters not a single audible word in all the shots of this documentary, proves he must suffer from some kind of mental disorder… not only from severe poverty and human alienation. WANG Bing has also documented this somber side of mankind in ‘Til Madness Does Us Part (2013). One of the inmates was mute and had no name.