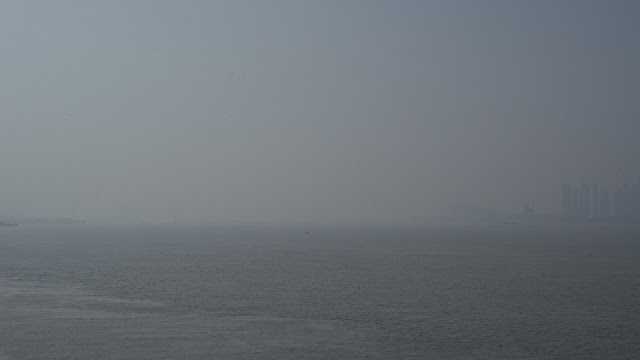 
OPENING SEQUENCE
Right away we notice these first two images are from a CCTV surveillance camera. A rough resolution, with bright RGB colours, as if it didn’t belong on a cinema screen. There are writings burnt into the screen, with a date (April the 4th 2020) and a clock marking the passing of time. A high angle point of view, from a building a few stories high, or from a street post. The shot frames the intersection of two streets, with cars, a couple motorcycles and pedestrians (who were absent from the previous shot). When suddenly an emergency horn blasts the painful sound of a one-note siren out of nowhere. Everybody pauses and looks around.

The city is Wuhan, in China (epicenter of this worldwide pandemic). The siren lasted for several minutes. The event was a « carefully orchestrated national day of mourning ». We ignore how the lockdown affected the inhabitants prisonners of the city walls. We don’t know how they coped with months of « house-arrests ». But this experimental documentary is not a reportage on Covid-19. It is rather a visual poem on pieces of a urban fabric woven together by generations of workers.

The following images filmed before the lockdown of the city, paint a portrait of the city from its forgotten corners. If the latter images are not surveillance camera, we still feel the gaze of the director who planted a tripod inside the landscape and pays attention to details for minutes at the time. Sometimes a message, a letter, a SMS writes itself on the sky and tells the sorrowful grievance of people who lost someone to the virus, which seals the documentary into the contemporary.

« [..] Initially, what drove me to make this film was a feeling of estrangement. Since I left Wuhan in 2010, I find the city has become more and more unrecognizable every time I went back home. There is always something newly built, or something in the midst of demolition. There is always the smoggy air. The city is working so hard to fulfill its official slogan “Wuhan, Different Every Day”; nonetheless, the traces of the past are almost completely erased. As a showcase of the city’s forward momentum, the riverside landscape has been dramatically altered over the past several years. [..] »

« [..] However, summoning up the memory is not to evoke nostalgia; instead, it is to reflect on consequences – to excavate the hints hidden in the ruins, and to seek for figures lost to obscurity. It is a contemplation on the past and the lost, that not only tells what happened, but embodies what could have happened, and what could yet happen. [..] » 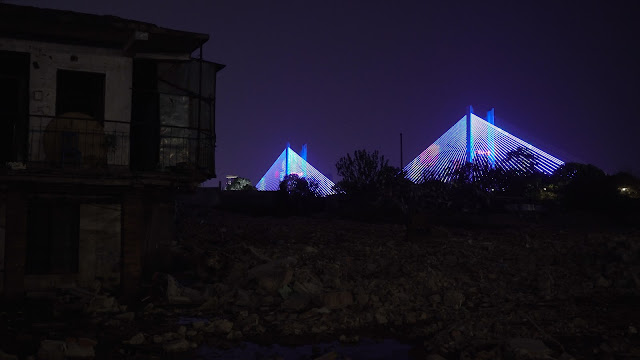 The film noir Wild Goose Lake (2019/DIAO Yi’nan) showed us the gangster side of Wuhan. A festival of lights and colours at night, a deluge of blood in the rain, a race through the miserable back lanes, a ballet of gang motorcycles…

But Shengze ZHU films the derelict spaces, terrains under construction, non-spaces, fringes, wastelands, the riverfront skyline, day and night. Yet the contemplative images offer a respite of strange beauty and untold poetry. We are surprised how long is possible to stare at and admire an alinement of bridge pillars, the viscuous flow of a river, the night time river beach… as the images linger on. The gaze wonders around and rests on places while the mind leaves on its own journey. The megalopolis of Wuhan emerges as a gigantic vessel stranded across the river banks. 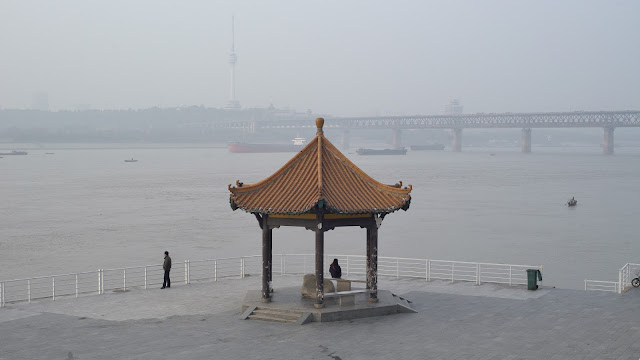 THE YANGTZE
« The Long River » is a major feature of the film and Wuhan. Nicknamed the « river city », this metropolitan area is traversed by water, in the form of the River Yangtze, the lakes, the wetlands. The suspended bridges span wide above the tumultuous waters, the concrete viaducts hop on a seemingly endless series of concrete steps. Every year the city organises a swimming contest across the stream. We see people gathering on the river banks, dancing together or peering in the distance.

Down there a ferryboat carries people, bicycles, motorcycles, cars and trucks from the North bank to the South bank, and they pour uphill climbing the steep slope to reach the city. Cars ahead, followed by heavy trucks, the motorcycles struggle to ascend and are left behind the cycles and pedestrians, at their own pace.

Up here an ancient kiosk with a curly roof, shelters a pair of sacred stones below. It towers over the urban square where people come and watch the ships go by. In a later shot, this same kiosk, is submerged by an exceptional flood of the Yangtze ; only its curly roof apears above water, and children swim underneath.

Over there, during several minutes, a couple of swimmers fight against the powerful flow of the opaque waters, followed by their safety booey, swimming in a static position like an airplane model in a wind tunnel. A fellow swimmer swims downstream with great ease.

Another Chinese film of recent years films a swimmer in the river, but from a marvellous reverse shot (from the river’s point of view) with a backdrop of the hilly city of Hangzhou, near Shanghai. It’s the film Dwelling in the Fuchun Mountains (2019/GU Xiaogang).

CONTEMPLATIVE CINEMA
In 2006, JIA Zhangze went to the site of the 3 Gorges Dam, on the Yangtze, upstream from Wuhan, and filmed a dyptich with a fiction feature : Still Life and a compagnon documentary : Dong. They depict the desolation and abandonment of an entire region that soon will be flooded by the erection of the greatest dam in the world. Towns are demolished, brick by brick, before the constructions go underwater, in order to be rebuilt farther uphill. 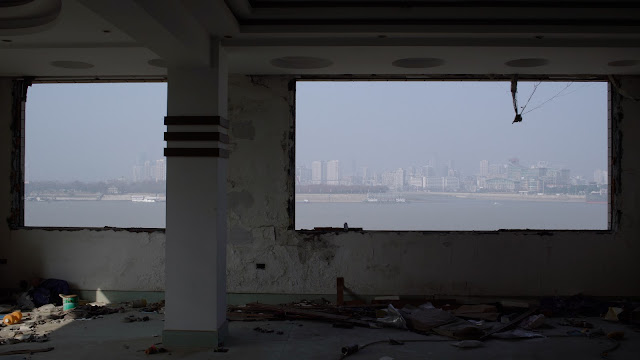 ITALO CALVINO
Director Shengze ZHU is fond of Italo Calvino’s Invisible cities - as I am - so here are a few excerpts related to this documentary :

“For those who pass it without entering, the city is one thing; it is another for those who are trapped by it and never leave. There is the city where you arrive for the first time; and there is another city which you leave never to return. Each deserves a different name; perhaps I have already spoken of Irene under other names; perhaps I have spoken only of Irene.”

“The inferno of the living is not something that will be; if there is one, it is what is already here, the inferno where we live every day, that we form by being together. There are two ways to escape suffering it. The first is easy for many: accept the inferno and become such a part of it that you can no longer see it. The second is risky and demands constant vigilance and apprehension: seek and learn to recognize who and what, in the midst of inferno, are not inferno, then make them endure, give them space.”

“The city, however, does not tell its past, but contains it like the lines of a hand, written in the corners of the streets, the gratings of the windows, the banisters of the steps, the antennae of the lightning rods, the poles of the flags, every segment marked in turn with scratches, indentations, scrolls.”

“Arriving at each new city, the traveler finds again a past of his that he did not know he had: the foreignness of what you no longer are or no longer possess lies in wait for you in foreign, unpossessed places.”