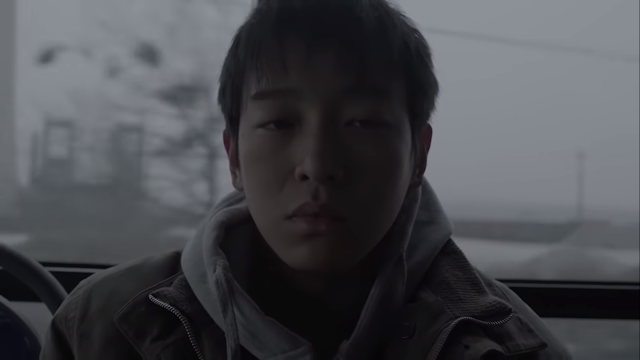 A 16 years-old student at the worst high-school in town, wakes up to a salvo of insults from his abusive father because he opened a window when stray garbage stinks outside, because he supposedly stole her mom’s coupon… Bu joins his best-friend, LI Kai, who is accused by YU Shuai, the school bully, of stealing his smart phone to confront him. At recess he’s rejected by his crush Ling. After a vehement argument and a violent push from Bu, the bully falls down a flight of stairs and is evacuated to the hospital. Bu is on the run, to escape the authorities and the angry family. He looks for money at his grandma only to find her dead in her sleep. He goes straight to his big borther’s who lives nearby to announce the bad news and gets insulted. Desperate for cash, he fetches his cherished billiard cue at the club, where he almost meet Cheng who’s on the lookout for him. He resorts to sell his cue to his neighbour Jin, after assisting him with the harassment of the owner of his dog’s killer. At the familiar monkeys pavilion of the local zoo, he meets in secret Ling, who refuses to go to Manhzouli with him. Following Ling to a restaurant outside of which he meets Cheng who doesn’t recognize him. Encouraged by Cheng, he writes down a threat letter to his rival : « You’re screwed » and sticks it on the restaurant window. Betrayed and deceived by his best-friend, he roams alone in the city, en route for Manhzouli. At Shuai’s hospital he sees Shuai’s big brother, Cheng. In the street he steals the Jianzi shuttlecock off of a group of elderly he insults copiously, losing all respects for the ancients and the paternal figure, which puts a momentary smile on his face. The sacred taboo is broken because he’s now a criminal. At a deserted riverbank dumpster, he yells his lungs out that this world is full of shit. Unfortunately he buys a fake train ticket to a street dealer who happens to work for Cheng. But Cheng pities him and let him go to Manzhouli. 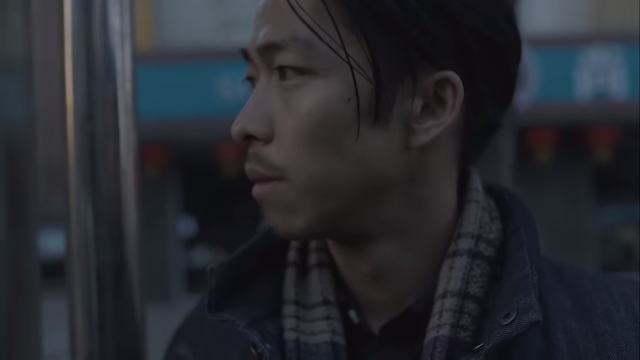 A local thug, wakes up in bed next to his best-friend’s wife. His best friend shows up at the door of this apartment he couldn’t afford, to find Cheng hidden in the bedroom. After a long pause in silence, losing both his wife and best friend at once, he’s had enough of this world and proceeds to jump out of the window to his death. Cheng barely budges or flinches. Though he rushes downstairs to witness the dead body laying at the bottom of the building. He blames the wife for the incident in a one-sided argument. He’s then on the phone with his best friend’s mother who is flying over immediately. But he could not pick her up at the airport. The mother is now at her son’s apartment where he committed suicide, and sits a lingering moment with Cheng who puts on a straight face. Cheng meets Bu outside a restaurant without recognizing him, and encourages him to do something about his girlfriend going out with an older man. Cheng meets his ex-girlfriend in a tunnel, where she lets him know that he should give up, because they’re no match. But before that, he took her to a restaurant where the kitchen caught fire. And Cheng took it on himself to save the burnt cook, for the first time caring for somebody else’s life. Cheng catches up with Bu, who bought a fake train ticket from one of his henchmen. Cheng pities him and buys him a ticket to Manzhouli. But Bu’s best friend shows up with his dad’s gun and hurts Cheng in the leg. 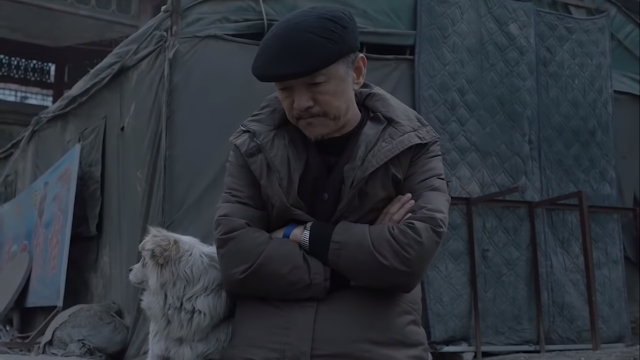 A 60-year-old retiree, wakes up with his small faithful white dog, on the balcony of his own apartment, utilized by his daughter and family, who desperately try to convince him to move to a nursing home. He’s Bu’s neighbour. After an altercation with his daughter, he exits to walk his dog in the streets. There he faces a stray dog, recently lost by its owner. A big white dog who attacks his little dog and kills it. Fortunately the owners posted lost dog notices on the street so he could track them down. At the door of the owner’s apartment he asks for excuses and compensation but he’s received by arrogance and insults. Bu meets him on the river bank where Jin disposed of his dog’s dead body. Bu begs him to buy his cue in order for him to buy himself a ticket to Manzhouli. Down in the street Jin is followed and harassed by the owner in his car. Bu stands his ground and threatens to scratch his car. Jin finally accepts to buy his cue. Former military, he’s not afraid of Cheng henchmen who hold him captive because he now owns Bu’s recognizable cue. With his new cue, he visits the nursing home with all the sickly elderly in a long and sad corridor. He follows his grand-daughter in the street and « kidnap » her to take her to Manzhouli. 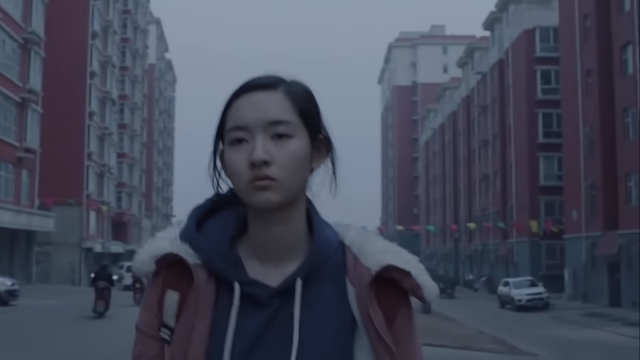 A lovely 16 years-old teenager (today is her birthday), Bu’s schoolmate, wakes up alone, as her mom passed out on the couch, and there is a leak in the bathroom again. She yells at her derisive mother who yells at her.
Ling turns down a date with Bu in the afternoon because she’s busy. Indeed she is having an affair in secret with the vice principal of her school. But after the incident between Bu and Shuai, she joins him, on the loose, at the monkeys pavilion where he often goes. There she refuses to go to Manzhouli with him where he envisioned to live with her, earning money with his foot juggling skills (Jianzi shuttlecock). She laughs at him and leaves. At the restaurant she meets her adultery lover who bought her a yellow rose and a birthday cake. Bu shows up and disturbs their date with a threat note on the restaurant window. Back at home, she talks to her mother who begs her not to become pregnant. At the hotel, she believes to be happy, treated right by an older man, possibly a father figure missing in her life. Up to the point when her affair becomes a viral Internet scandal. Then, he becomes aggressive and insulting because they’ve been spotted together at a karaoke, thus ruining his school career for ever…
She returns back home where her mom is confronted by the vice principal and his wife. She sneaks out, but soon comes back with a baseball bat to hit the two intruders in front of her mom.
Now she’s on the run as well and joins Bu at the station to reach Manzhouli eventually... 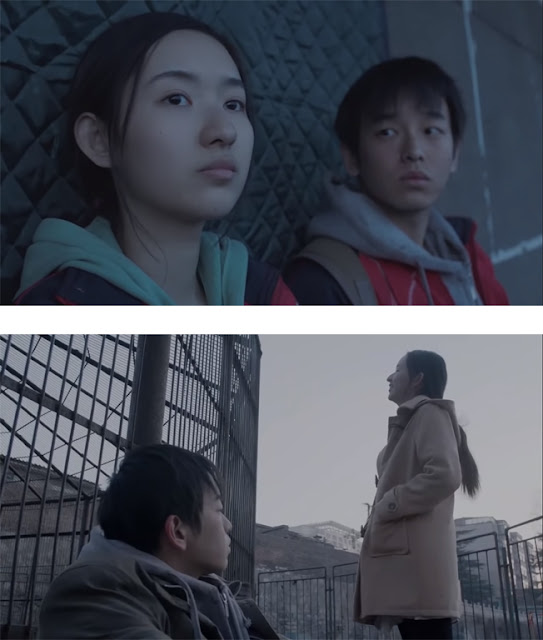 Love is hard to get. Not to mention tough love from their parents (or son for Jin), the main characters experience unrequited love (except for Jin who is loved to bits by his granddaughter). Cheng is dumped by his girlfriend, and rebounds right away with the wife of his best friend. Bu has a crush on his classmate Ling who disregards him because she has an affair with the school vice principal. But soon she learns that love isn't eternal, especially with an older man who is fine to take her to the karaoke, restaurant and hotel until he's caught red handed. Then love turns sour and he insults her as if she brought that onto him. And Jin is all alone (possibly widower), only living for the attention he gets from his granddaughter who is caught between her parents and her favourite grandpa. 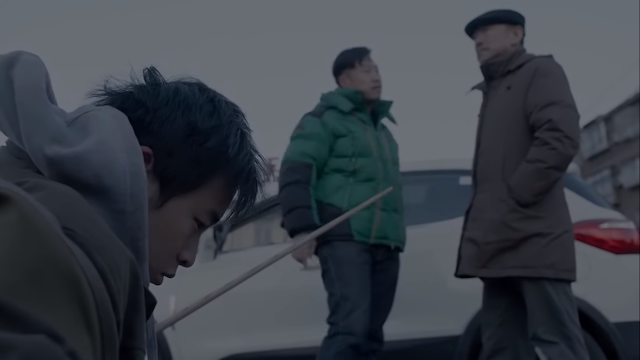 The tables turned when Cheng faces his mom and dad, at the door of the hospital room where his baby brother is dying. The thug becomes bullied by his parents who he pays respect to even while being yelled at and insulted. They reproach him not doing enough to avenge the honor of his brother who was defeated, injured and ultimately killed by his schoolmate Bu. Losing face is the ultimate humiliation in China. But respecting elders (especially the family elders) is utmost important. Cheng dislikes his brother, a nobody, and lacks the motivation to pursue his killer as well as he should.
One person though is not ready to lose face, and fights back. It’s the owner of the killer dog. When confronted with the remains of a beloved pet in a plastic bag, he starts off by denying any implication of his dog. Then he blames Jin for hiding his missing dog. Finally he follows Jin down the street in his car to insult him. Bu who wants to obtain money from him, stands as an eye witness of the earlier carnage and confronts the owner. He threatens to scratch his car with a rock three times, and three times the owner dares him before pushing him on the floor with his foot. Three times Bu rises again and fails to touch the car. This small incident is enough to earn him the heart of Jin, who finally accepts the deposit of his pool cue. By being humiliated by the owner, he somehow avenged the honor of Jin.

The certitude of mortality menaces throughout the film. Its apprehension overshadows the mundane lives of brave personalities.The film begins with a traumatic error causing the precipitous suicide, out of passion, of a novel cuckold. Bu’s best friend pretends to put his dad’s stolen gun to his temple, before, by the end of the film, pulls the trigger with the same gun and take his own life off screen as a train sounds off in an epic 20 min plan séquence. Shuai falls down the stairs to his death, turning a heroic act of self defense into a murder Bu will have to live with for the rest of his life. Casual accident turning into a life sentence. Jin’s little dog is killed rabidly by an enormous stray dog for no apparent reason. Bu’s grandmother is found on her deathbed, who died of her natural death, leaving Bu alone, depriving him of a precious ally in the family that hates him.