Paul Schrader : "Tarkovsky's films mark a deviding point in the history of Durational Cinema. Before Tarkovsky, the use of withholding and distancing devices which Deleuze calls "Time Image", took place in the context of commercial theatrical cinema. Transcendental Style falls into this category.
After Tarkovsky the use of these devices became increasingly exagerated, and their films fell into the domain of film festivals and art museums. The 3 sec Bresson's shot of a door became a 10 min static view of traffic. Transcendental Style had morphed into the hydra-headed monster we call "Slow Cinema". Without going into length, I'd just say that Slow Cinema refers to films of considerable length where very little happens. [...] This is why I say it's outside the perview of commercial cinema. Cinema in my opinion is inherantly narrative."


Paul Schrader : "To me when movies move away from their narrative nucleus, they vector in one of three directions. And all three are dead endpoints. One is the Surveillance Camera, another is the Art Gallery and the third is the Mandala." 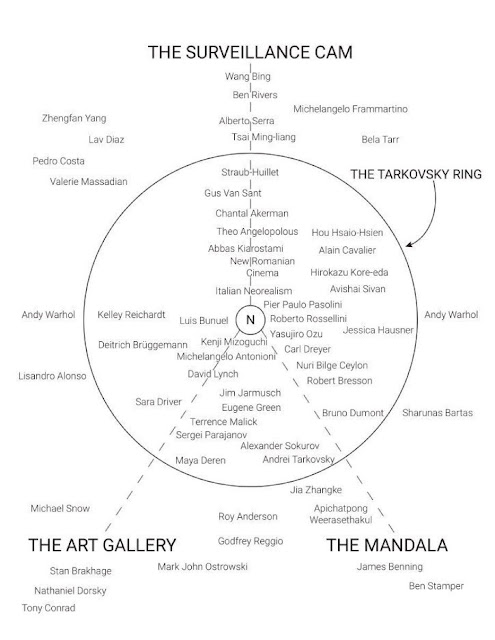 N.B. Thanks to Nadin Mai for posting Schrader's chart on Twitter.

Check out my Durational Cinema Map (from Schrader's)

BenoitRouilly said…
From Lynch to Kiarostami to Ozu: See Where Your Favorite Directors Fall on Paul Schrader’s Chart of Non-Narrative Cinema Indie Wire (24 May 2018) Chris O'Falt
June 3, 2018 at 3:23 PM