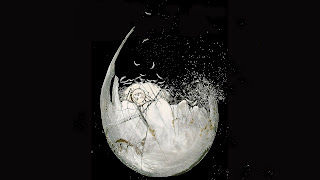 This opening sequence is less perplexing than the film itself, and only introduces the two lone protagonists. First the enigmatic Man. Secondly, the little Girl and her egg. They are in separate locations, but it forebodes their eventual meet-up as the only spoken words are a flash-forward of the little Girl asking the Man who he is (which he will answer by the same question). Otherwise this introduction uses purely visual imagery and a musical score (or simply silence and diegetic sounds) to install the story.
A simple accumulation of wordless images to create an atmosphere of mystery and enchantment like a fairy tale. The environment seems a bit out of context, without any lively presence, without a population (except the fishermen and the tanks later on in the anime), without any sign of an outside world. And the final shot of the film (a homage to Tarkovsky's Solyaris; 1972 final shot), confirms it's a small world closed on itself.

The powerful symbols are all present from the beginning: The egg with the fetus-like chick embryo inside, symbol of fecundity. The Man with a big stick, a cross, symbol of virility and death. The eye-ball ship symbol of Noah's ark. The little innocent Girl, symbol of purity and faith. And the steam-punk environment, symbol of a decadent industrial world.
The first image might appear cryptic with the two hands becoming one which crushes onto itself. That could be interpreted as a summary of the film : two protagonists meeting with a distance between them. One vanishes and the other is crushed by force (the egg of the Girl). 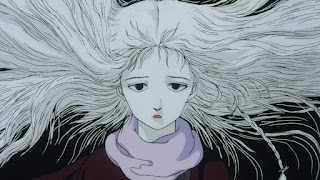 Not much more is happening in the film, yet it is a fascinating journey through stylistic drawings, barely mobile, and a longing choir of laments. Mamoru Oshii enjoys animating this world, especially to move the attached white hair of the Man and the long white hair of the Girl. There are exquisite shots of strands of hair filling the screen, in an Art Nouveau style from the 1900s. Angel's Egg is Oshii's Ghost in the Shell's contemplative younger sibling.

We could start by a run down of the opening sequence, but that's not a given. It's always a good start though, as the thorough description accompanies the entry into the review like the film does. With as much and as little information as is shown on the images themselves. The reader gets a sense of the universe encompassing this film and gets introduced to key elements (that might be metaphoric, meaning symbolic, or metonymic, a part for the whole). The elements are key to the prologue, but not necessarily key to the story. Because re-telling a "story" with plot-points and articulations is denaturing the natural flow of time between these elements. It doesn't make sense to summarize such a film, because it's a redactorial process that excerpts key-frames where something is happening and eludes all the dead-times where the pace of the film is pulsing its distinctive aura. Contemplative films don't fare well with pitch, abstract, summary, blurb unless it's contemplative writing that doesn't try to simplify its contemplative mode of narration. For instance, a haiku is a short poem that eschews explanation and describes elusively. That could be a potent blurb for a contemplative film. But generally the long form is more appropriate, in order to match the long sentences with the long takes, to take your time describing as the film takes its time recording images. Just to put the readers in the right atmospherical mood and not press them in a race to the finish line, zapping from one reveal to the next, telling the ending, devising some politics... A contemplative film is not a book. It's not reduced to its character study, its psychology, it's dialogue, its plot points, it's moral. And like a piece of cinema it must be reviewed in images and sounds, which corresponds to its mode of storytelling, paced and attentive.

What we ought not do when reviewing a contemplative film is precisely what I'm doing right now : explaining how to do it, or making its structure self-conscious.

We must not talk about the boredom to watch it, or any other negative aspects that detractors would oppose to the film, leave that for the unbelievers. A contemplative review must be positive and embracing the project of the filmmaker. "Ennui" is a metaphysical state described for Modern Cinema by the Existentialists. It's not a negative trope anymore, the 60ies conquered it, so CCC (Contemporary Contemplative Cinema : post 1994) shouldn't have to defend its legacy. I know Angel's Egg is from 1985, much earlier than the emergence of the contemporary iteration of Contemplative Cinema. It's more of a precursor that still uses a musical score. But it's also a fantasy world that doesn't match the more reality-grounded work of pure Contemplative filmmakers.

A list of recurrent details that punctuate the work (and not a list of most significant items, plot points, lines of dialogue...) is a legitimate descriptor of the contemplative mode. This is a way to present the accumulation of "pillow shots", that are pauses in the narration, also signifiers of an environment hardly developed otherwise. 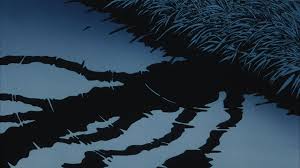 Oshii likes to show water under its many forms : stagnant, ripples, drops or flow running down a fountain, the sea. As well as painting the reflections in the mobile water, undulating, waving, distorted, reflection of the light bouncing off of water onto the Girl. We see the water plants swaying underwater like in a Tarkovsky film. And all this is extra hard work for an animation, while a documentary or a live fiction only get to record water itself.

Water seems to be important for the Girl, even though her environment isn't particularly arid or deprived of access to water. Fountains, water tap are running with clear water, lakes and rivers are full of drinkable water, rain is pouring down. But the Girl seems obsessed with seeking water points and filling a glass jar everyday. This is her daily routine. That and caring for her large egg.

The European, say Parisian, architecture is a decorative but empty vessel. Nobody lives behind its many windows, nobody fills the street. The small lanes, the chimneys and rooftops, the cobble stones pavement, the street lights... compose the theater where the protagonists cross path, meet and wander. Yet the Girl, living on her own, doesn't seem lost, alarmed or desperate. She feels at home and knows the littlest passages like the back of her hand. Everything is monochromatic, dark and sinister like a street from a Bela Tarr film (Werckmeister Harmonies), but feels haunting like a folks tale.

The episode of the shadow-fishes (Coelacanth) turns this anime into a world of faery, the air becomes an invisible water, the invisible fishes are only seen projected on the facades or on the street as a two-dimensional shadow, and fishermen chase after these illusions throwing their spears in vain. The shadow-fishes slide against the facades but the windows don't carry their shadows, the fishes seem to glide underneath the windows, as if it was a vaporous black ink that printed only onto walls.

It is useless to re-tell in the review the monologues of the Man on the tree and on Noah's ark, it's for the viewers to discover during the film, and to start making their own interpretation like numerous are found online. But I will break the ideal model of a contemplative review to make a Freudian analysis of the story.
Some say the egg is symbol of blind faith. But the Girl carries it under her garments in place of a pregnant belly. An egg is itself a symbol of fecundity, whether it is fertilized or not. The chick embryo is also an image of the human embryo. When she holds the egg against her ear to listen to breathing sounds, she has an out-of-body experience where she is able to listen to her own pregnant belly. She protects the egg against the Man who wants to know what's inside. She wonders also. She imagines it's a bird or an angel, like a mother. There is a struggle between the Man and the Girl about this egg, like the father and the mother of a baby. Who knows best? The feminine intuition or the masculine reflection? 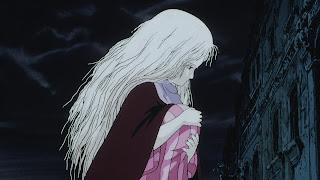 The Girl is of course too young to be pregnant, but this egg seems to be a proxy-pregnancy. And the Girl is intentionally younger to represent the innocence and purity of a woman before pregnancy. After the egg is broken by the Man (with his cross), she cries and jumps into the water to her death. As she hits the water surface, the moment is suspended in time and she can look at her reflection like in a mirror, except she sees herself as a grown woman (after pregnancy). The death of her innocence causes dozens of smaller eggs to resurface. It's not clear what are the intentions of the Man in finding out what's inside the egg, as if he wanted an abortion. In the end she is present on the eye-ball ship, amongst all the statues, as a sacred figure of the Virgin Mary (with an egg on her lap, instead of a baby Jesus) young as before, as she will always be remembered. Mary being the symbol of the miracle pregnancy, and mother of an angel, or rather a God.

That's all I will say about the film (I have already revealed too much with the psychoanalytic interpretation), to leave something to the imagination, so that readers could be tempted to become viewers and piece together the puzzle of impressions I just laid out, without explanation. (This wonderful anime can be seen on YouTube)