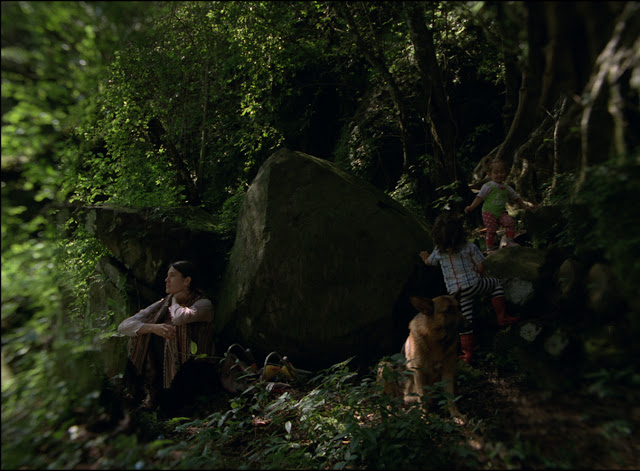 Carlos Reygadas : "When a film is made, you try to share what you feel, what you think, what you imagine... I don't think there are any limits, but one's own limits. I do have limits, but I do feel totally free. So I think I do make perfectly normal, easy films. that is not a sea-change in comparison with standard films. [..]
About narrative, I try to make very realistic films. We as human being, we have images from the past, dreams, memories, fantasies, projected future which mostly doesn't come as we imagined it... We don't change from one to another with a code in ordinary life. So I didn't want to use a code in the film. I think the public is very wise and moving very fast in cinema. There is no need for such codes anymore.  So I didn't want anything that would make you (public) connect directly what is the future, what is the past, what is imagined, what is fantasy.   As it happens in our own lives, as in our own heads. That's why I respect the public very much, that's why I made the film in this way. I think the public is grown up, and intelligent. That's why I like people not to like the film, because that means other people like the film, because we're all free. I think it's just good that we all move around in the film as we feel. [..]
Well I didn't say I didn't care what the press thought. I'm sure a lot of the press won't like my film, and that's actually very positive because some films just don't please everybody. It's not my purpose to please as many people as possible. Because it's as though you're offering them something totally bland. I want to insure that some people are really moved and touched by the film, even if it's a small proportion of people. That's what I'm aiming at. I'm not trying to please the public at large.Of course, it's a pleasure if as many people as possible like the film. I want some to like it. [..]
Precisely, I hope the film to be powerful to the point where you can't sum it up really easily. Or else we would only read synopses... You saw what you saw, that's enough. If you retain something from the film, then that's fine. If something grows within yourself, that's it, that's what really counts. And that's the greatest compliment [of not being able to summarize it] I ever received for the film. Thank you."