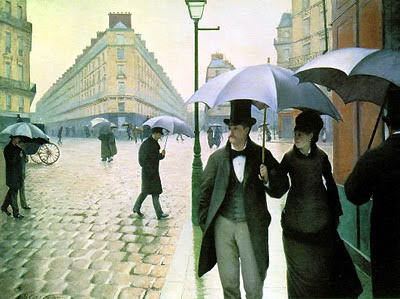 [..] You see how hard people [in XIXth century Paris streets] work not to be bored.
This was where it started, I told him [Saussure], the modern mania always to be looking at something, feeling something, going somewhere.
Baron Haussmann thought he was just widening the streets, firming up the boulevards, getting the city clear and organised. [Note: actually it was to give fire lines to Napoleon's cannons and march his armies!]
By giving people all this space to walk in and all these sight lines to peer down, he wrought all the boredom of modernity.
Once people saw that there were all these things to do and see, all these places to go, they understood that they could also be bored.
Boring compared to what?

This is the problem with Bergson.
Bergson is boring. [..]

Is duration boring because it's self-evident? [edited out : rant about Bergson and Bachelard's theories of duration and instants]

Both of them had the same problem with duration.
they both thought it was boring.
The same thing again and again and again.
The antipathy to boring duration led them both astray. [..]
Because [Bachelard] sees that you escape boredom only against the background of boredom, by accepting it, letting it in, working with it.
He sees that you can be bored - or not - only by comparison.
And if you're stuck in the rut of one moment after another, you can't break out to pleasure.

Benjamin felt this boredom too.
You see it the cracks of his writing: he talks about the constant, sudden change in a movie, about its shock effect, about how the mechanically reproduced work of art generates an infinity of copies, all the same, one after another.
When he says that nonreproduced artwork has an aura, what he means is it's not boring.
The presence of the artwork is tied to its nonboringness, and that package is called aura.
The artwork isn't boring becase it's unique, because it carries its baggage, because it aggressively marks its place in time and space.
Mechanical reproduction is boring it's the same thing over and over again.
A movie has to keep jostling the viewer, changing and jumping away every moment, just to keep you interested.
"The painting invites the spectator to contemplation; before it the spectator can abandon himself to his associations.
"Before the movie frame he cannot do so."
Paradoxically, the static artwork allows the viewer to drift, while the jumpy, shifty movie pins the viewer into a rut of presents, one after another, methodical and predictable.
The movie has to keep distracting your attention from the looming threat of boredom.

Re-presentation is boring.
It flattens everything out.
The machine of re-presentation makes everything equal.
Once your own experience is held away from you, why would it hold your interest?
Why not just watch television? [..]
In the empty moment you can't get bored.
Things change all teh time; there's always something else to do.
We eleminated the valleys.
We took advantage of time's distraction from itself. [..]

Movies rely on that peaks-and-valleys energy, the roller-coaster highs and low lulls.
We want to force people to get over that.
We want to iron out the oscillations.
In the empty moment, you can't keep being batted back and forth like the ball in a pinball machine.
We have to focus, stay alert, watch for sudden shifts.
You can't be bored because you can't rely on the empty moment as a space of contrast between being bored and being something else.
You're inside that empty moment.
You lose that extremity of emotion.
you need the empty moment as the terrace on which you step outside for a respite from the emotions, to gather your feelings, to figure out what you're feeling, how it's moving.
To feel these emotions, you need to be able to step outside them.
So the empty moment flattens it out a little.
Nothing comes free.

If you don't understand what this is like, you might think it means that the empty moment is boring.
far from it.
You've lost the saef haven that gives you a breather from your raw self.
You have to face it.
Moment after moment after moment.
It's all you've got, and you're finally free to confront it.
Except that you don't face it and you don't confront it; you've traded in those options so that you can live inside it.
It's liberating, but I won't deny that people find it hard to get used to.

So you see we do what we can to keep people from getting bored.
Movies don't work because they're all about the spaces; to watch a movie, you have to get inside the empty moments.

It's liberating to give up this nonsensical effort to police discriminations among types of experience. [..]
In the empty moment, you'll see what it's like to live inside the unprocessed experience of your own body. [..]

We're trying to get people to concentrate on teh experience of their bodies; we're not hemmed in by linear time. [..]
Moments succeed or precede each other based only on this made-up story about linear durational time.
There's no reason they have to.
We eliminate the waste.
Maximize each moment.
Leave out the boring ones.
some people find it strenuous and wearing.
We try to screen those people out before we start.

People complain that they can't get distracted in the empty moment.
they're missing the point: there's no longer anything to be distracted from.
In life you have to distract yourself from the boredom of linear time.
In life time is distracted from itself.
Here you can rest, you can center yourself, you can focus.
Obviously, you can't do that inside linear time.
So you can't have it both ways.