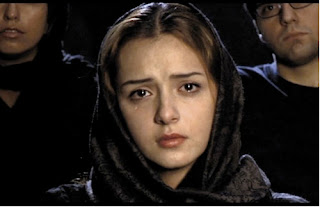 It’s been long since Abbas Kiarostami started trying to eliminate the role of the director in making films. His works bear witness to the fact that, with him, the function of a director is closer to that of a concept artist than a logistic manager. His latest, Shirin (2008), is the next logical step in this process of progressive non-intervention of director. An extrapolation of his segment Where is My Romeo? (which seems like a experimental doodle in comparison) in To Each His Own Cinema (2007), Shirin presents us an audience in a movie theatre, made up mostly of women, played wonderfully by over a hundred professional actresses, watching a period melodrama based on the love triangle between king Khosrow, princess Shirin of Armenia and Farhad, the ace mathematician and sculptor. No, we do not get to watch one frame of the film that is playing in the theatre. Instead, what we get is a film whose imagery is constructed entirely using close-ups of the audience’s reaction to the movie they’re watching while the soundtrack is that of the movie being seen. Emotions run the gamut – empathy, sympathy and apathy – as Kiarostami’s mildly differential and subtly accentuated lighting lovingly captures each contour of these beautiful women’s faces.
One familiar with the works of Kiarostami would know how the director uses the film screen as a kind of mirror for introspection. Be the mirror pointed towards the society at large, as in Homework (1989) and Ten (2002), or towards cinema, like in Close-Up (1990) and Five (2003), or towards the director himself, as in The Wind Will Carry Us (1999) and Life, And Nothing More… (1991), Kiarostami’s cinema has always flourished on this dialectic between reality and its reflection on screen. Here, in Shirin, he turns the mirror towards us – the viewers in the theatre – as we become our own audience. As a result, our reactions get tied to those of the audience on screen. We smile when they laugh and we are moved when they break down. We are surprised at every small twitch of their eyebrows, every casual gaze away from the screen, every mild shudder of theirs, and every tear that reaches their lips. Shirin make us privy not only to all our gestures and emotions which we are usually oblivious to, when sitting disarmed in the darkness of the cinema hall, but also to the taken-for-granted social experience shared by the collective of strangers wherein we all seem to concur emotionally and, yet, differ vastly in the vehemence of our responses.

Shirin takes place in real time. The 90 minutes of the film coincide with the runtime of the film within the film. In some ways, I guess Shirin could be considered a companion film to Jafar Panahi’s Offside (2006), which took off from the fact that women, in Iran, are not allowed to enter football stadiums and which, too, unfolds in real time – 90 minutes again – alongside an international soccer match. While, in Panahi’s film, we are presented with a model of rebellion against existing norms, Shirin hints at conformism. Offside showed us an attempt to change existing reality whereas Kiarostami’s film presets to us a longing to enter an alternate one. There is a glint in all these women’s eyes that betrays their celebration of the film, which seems to perfectly acknowledge and express their own plight, and, consequently, a yearning to enter it forever. They seem to understand that this freedom is going to be short-lived and they would have to return to their oppressive lives soon (One woman has a plaster on her nose. We are tempted to ascribe it to domestic violence). Even though none of the men in the cinema hall get a close-up from Kiarostami, they do have a constant, ghostlike presence in the background. Whenever the scarves on their head slip off, the women snap back to reality to adjust it. One woman even winces when sunlight falls on her face as the door nearby is opened suddenly.

Of course, the first movie (not considering too much the hilarious opening scene of Ross Herbert’s Play It Again, Sam (1972), which too explored the possibility of life merging with art) that comes to mind watching Shirin is Godard’s My Life to Live (1962), in which Godard provides a close up of Nana (Anna Karina) weeping while watching Dreyer’s The Passion of Joan of Arc (1928) in a movie theatre. Like Godard, Kiarostami links the life of Shirin to that of the audience in the film by making the “story” of the film highly reflexive (Kiarostami might even be referring to Dreyer’s film, given the French connection of the film in the form of Juliette Binoche). Following Khosrow’s death, the princess asks her friends: “Are you shedding these tears for me, Shirin? or for the Shirin that hides in each one of you?”. This is as overt as Kiarostami’s film gets. The world in the film, too, is highly patriarchal, with the fate of Shirin being decided by power games played by men – kings, sons and lovers – alone (“Damn this game of men that we call love!”). By impartially cutting from one face to another, instead of dwelling on a single face, Kiarostami might just be making a statement of generalization and pinning the film down to the situation in present-day Iran. This notion becomes even more plausible given that the love triangle between Khosrow, Farhad and Shirin is essentially a contest between the government, an artist and a woman.

Despite its avant-garde and nonconformist nature, surprisingly, Shirin works well as an experiment in popular genre cinema – the one zone that the director has been reluctant to get into. Shirin proves, at least as far as modern day genre cinema is concerned, that sound is more important than the visuals if instant gratification is aimed for. It is certainly easier to keep track of and engage ourselves in a film when we look away from the screen than when we close our ears while watching the images. In Shirin, not once are we given visuals from the film within the film, but we are clearly able to understand its structure and chronology. There are flashbacks in the film that we never miss. Action scenes play out in our minds vividly (with reduced ASL, of course!) and voices are immediately matched with stereotypes that have been given to us through the ages. In a humourous moment, we see a mildly tearful woman break down completely when the orchestral music swells. This is genre cinema being taken apart to reveal its manipulation, folks. Kiarostami removes the redundant video track, so to speak, and adds a new one to counterpoint the soundtrack instead of reinforcing it. So, in a sense, Kiarostami moves both towards and away from genre cinema simultaneously. In the director’s own words: “It is a combination of both freedom and restriction.”

Kiarostami once said the following in an interview which sums up so effectively his whole body of work and especially Shirin:

“A filmmaker has to be conscious about his responsibility. I always wish to remind the audience that they are watching a film. You see, it is very dangerous to make the audience more emotionally engaged than they need to be. In the darkness of the cinema, people are so innocent. It makes them feel that everything is closer and stronger. That is why we should not make them even more emotional: People need to think when they watch films, not to be robbed of their reason… I make half movies. The rest is up to the audience to create for themselves“

Kiarostami’s idea of cinema is one that requires the physical presence of an audience for the completion of the enterprise that the filmmaker has set off (“There is no such thing as a movie before the projector is switched on and after the theatre’s lights are turned off.” he says in another interview). Shirin is yet another half movie in the director’s filmography not only in the sense that it provides us with only one half of the melodrama – the soundtrack – being played, but also because it leaves it to us to decide the connotations of this bizarre marriage between an expressionistic soundtrack and a realistic imagery. In fact, Shirin is made of numerous such interactions between the prime elements of Kiarostami’s cinema. Throughout the film, there are rich conversations between sound and image (by direct opposition between generic and non-generic forms), the past and the present (The women seem to be able to identify themselves with a fictional character living in a distant past), fiction and reality (As always with Kiarostami, one isn’t able to separate what was scripted and what was spontaneous), the women and the film they are watching and Kiarostami’s film and us. And that is one of the reasons why Shirin is best watched in a theatre (It’s kind of like watching the last chapter of that Tarantino movie!), where, for once, we would be tempted to take a look around.
Kiarostami narration

HarryTuttle said…
Read also on our blog another article on Shirin:
"Inexhaustible variety of emotions against a void (imagined) screen" by Yvette Biro
August 28, 2010 at 8:58 PM

Coffee Messiah said…
An interesting review of a film and director I'm not familiar with.

Sometimes I wonder if I'll ever see all the films I've been writing down since reading WITD and some other blogs.

HarryTuttle said…
Shirin is probably not the best place to start if you're new to Kiarostami and this type of cinema...
I would rather recommend more conventional (and no less beautiful)earlier work such as :
Where is my friend's house?
The wind Will Carry Us
Through the Olive Trees
Then you'll be hooked, and you can move to the more experimental side of his œuvre.
August 30, 2010 at 10:22 AM