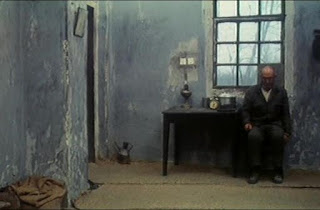 Sohrab Shahid Saless’ Still Life (Tabiat-e Bijan, 1974) is, barring Kiarostami’s Homework (1989), the greatest Iranian film that I’ve seen. To see that even during the pre-revolution era, when the escapist cinema of Hollywood and its imitations were much more popular, such uncompromising and quality films were being made is both surprising and hope-instilling. Typically European in its form but uniquely Iranian in its content, Still Life is the kind of movie that contemporary contemplative cinema takes off from. Produced by a newly formed group called Kanun-e Sinemagaran-e Pishro (Centre for Avant-Garde Filmmakers), that also produced some of Mehrjui’s early features, the film was one of the many films that were discontented with the existing way of governance. Although never overtly political, Still Life not only manages to critique deeply the disparity that existed between villages and cities of the country during the Shah’s regime, but also remains one of the best works from the country till date. Let’s wait and see what the present-day Iran brings in reply to this masterwork.
Still Life documents a period in the life of Mohammad Sardari (Bonyadi), a veteran employee of the railway services living in a rural part of the country and whose sole job is to close and open a railway crossing few times a day. He is waiting for a festival bonus from the department that is long pending. He is married and his wife (Zahra Yazdini) supplements his income by weaving carpets and carrying out minor tailoring jobs. We are only given such utterly quotidian details from his everyday life – he operates the railway gates in the morning, he rests at his accommodation near the crossing, he returns home for lunch, he goes back to operate the crossing for the evening train, he returns home for dinner and he sleeps - but that is all there is to Sardari. We are also given a few glimpses of his son who returns home for a day from the military service and a bunch of customers who exploit Sardari by underpaying him for the carpets his wife has woven. One day he receives a letter from the railway department that intimates him of his retirement from service. Sardari is unable to comprehend the meaning of the letter and starts to believe that he has been unreasonably given the sack. Heartbroken, he decides to go to the department headquarters located in the city and find out the reason.

Saless’ style is remarkable here. Almost throughout the entire film, he presents us long, uninterrupted extreme long shots of Sardari going about doing his routine at the railway crossing. Even when the old man is home, Saless and cinematographer Hushang Baharlu give us mostly medium and long shots that are filmed with the camera placed at the ground level, sometimes reminiscent of Ozu. In either case, Saless’ eye is that of an ethnological documentarian - interested in what his protagonist is doing, but never wanting more than that. The mise en scène is spare, stripped down to bare essentials, with a chunk of space between the characters and the camera. Even gestures, dialogues and movements are reduced to an absolute minimum. Watching the indoor scenes in Still Life is like gazing at an aquarium in which the fishes indifferently perform the same mundane activities over and over again. Halfway into the film one is acquainted with the routines of the old man and his wife. He comes home, rolls his cigarette, and starts smoking and she continues to stitch clothes and weave carpets. Even when their son returns home after a long time, conversations are perfunctory and the character functions are unhampered.

But what is singular about Still Life is the way it handles cinematic time. Saless, while letting us witness individual scenes unfold in real time – be it entire dinner sessions or railway transitions – without hindrance, shuffles the order of these scenes in a way that disregards chronology. In one scene in the film we see the couple’s son return home and in the next one, he is missing. And then he’s back in the subsequent one. Soon one notices that most of the scenes could have taken place in any arbitrary order in real time and each of those orders is essentially irrelevant, given the idea of the film. What’s the use of chronology when time repeats itself by going in cycles? In Jeanne Dielman (1976), Chantal Akerman used each day of the protagonist life’s to illustrate its microscopic deviation from the previous. She seemed to be essentially constructing a spiral out of Jeanne’s life – a structure that made her life seem to go in circles but which, in actuality, ends only in annihilation. Saless, on the other hand, treats time as some form of stray deadlock that could only be resolved by an alien intervention. Within this loop, all time is one and each day is virtually indistinguishable from the other.

In one scene that comes towards the end of the film, Sardari visits the railway headquarters to seek an explanation for the retirement notice. In the building, he notices a pair of officers scanning through old photographs reminiscing about the past and talking about plans for the weekend, And just there, Saless provides the most overt and powerful contrast between the life in rural and urban Iran. The officers with a lush past and a busy future stand directly in opposition to Sardari, whose past is almost non-extant and whose future promises nothing different. Still Life would definitely form an interesting companion piece to Antonioni’s Blowup (1966), which seems to resonate more and more with the years. Both Thomas (played by David Jennings) and Sardari are perfectly alienated creatures who pass through life without an iota of an idea about their place in the world. Only that their geographical locations are poles apart. Thomas is one of cinema’s many alienated urbanites trying to impart a meaning to their lives. On the other hand, Sardari is the rare villager who believes that life will go on as it is and who is nudged to action only when that belief is shattered. But in essence, both of them are individuals wallowing in their own world unable to snap out of it.

Even with all its serious themes, Still Life isn’t entirely humourless. There is a constant undercurrent of dark comedy throughout the film (In a masterstroke of black humour, Saless has Sardari regularly tune the alarm clock!), but, like all the other elements of the film, it remains extremely subtle and never thrusts itself upon us. Instead, Saless builds one stretch of time upon another, elevating the film from the territory of mere narrative cinema to the realm of the philosophical, the experiential and the contemplative. In the shattering last scene of the film, we see Sardari, who is now forced to accept the reality that he can no longer work at the railway crossing, vacating his quarters. After he loads the cart with his possessions, he decides to check the house one last time for any object he may have forgotten. As he stands in the middle of the now-empty house, gazing at the room of whose inanimate furniture he had become a part of through the years, Sardari notices the final remnant of his life at this place – a piece of mirror hanging on the wall. He reaches out to collect it and, in the process, looks at himself for the first time in the film. Mohammad Sardari has indeed become old.

HarryTuttle said…
Thank you for this great review! I wish I could watch this film somewhere...
September 14, 2009 at 6:45 PM