By HarryTuttle - August 08, 2008
Nina Menkes is an independent American filmmaker making experimental films since 1981, such as Queen of Diamonds (1991) or Massaker (2005). Her official website can be found here. She kindly visited our blog recently and agreed to answer to the questions of Jit Phokaew (Limitless Cinema) and Filmsick, who reviewed her latest film Phantom Love (2007) at the 2008 blogathon. The interview was held by email on August 5th 2008.
Note: A great interview by David E. James is available at Senses of Cinema, as well as a detailed article, Nina Menkes: The Warrior and her Jiang Hu, by Bérénice Reynaud. 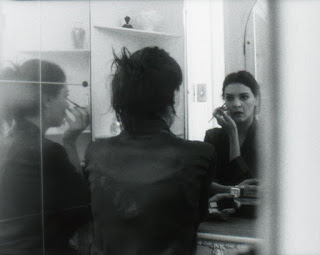 NINA MENKES : Yes, there is very little dialogue in all my films. Some films have a bit more than others, but in general, I stay away from dialogue, because I feel that the most powerful energies in our lives, and in fact, the way we actually pick up information and feelings about ourselves and other people is not through words, but through energy and other levels of connection. Words can be powerful and meaningful, like poetry, for example, can be so moving, but just talking,chatting “dialogue”-- usually, its waste of time, in my opinion, and also, it covers up deeper levels of reality.

For me, the casino is an intense symbol of extreme alienation for a few reasons.

It is labor with no product. Basically in a casino, people are losing money as entertainment. The worker, just takes your money and you don’t get anything at all. I guess you get a thrill. But actually, this thrill will pass and what did you get? Even if you buy a cheap sweater at K-mart, you got a sweater. You can wear it in case you are cold. At the casino, the money drains into the pocket of someone else and there is no return. And the casino is so outside time. In Vegas there is no natural light and no clocks inside the casinos which are open 24/7. So its hell.

To me, it’s a perfect picture of hell. Visually, I like it too, because of the numbers.

The numbers are connected with Death. “His number was Up” in slang English can mean-- he was killed. Money is counted. Counting in general is from the devil…it’s a known fact, that counting is connected to death. People sometimes like to know how old I am, but I don’t like to count, how many days have I been on planet earth? How many days are left? This is not for us to know. The Bedouins in Sinai, where I lived for some months, years ago—they don’t know when they were born, so they don’t know their age. Its very liberating. The numbers constrain you, they tie you down, they limit perception. God is infinite and cannot be counted.

This connects to the above questions, in terms of counting, and time is normally “counted” in a very specific and linear way. This way of counting time and arranging time and space, which is the conventional way, is 1) not interesting to me , but more than that—I think its also not True. When I was in India some years ago, I had a dream that I was wearing two wrist watches. One on each hand. And each watch had two hands, and both of the hands, in both of watches were spinning wildly counter-clockwise. When I woke up, I told a swami, whom I met on the road, about my dream, he said :

- “Oh…sure…you have contacted the reality that is outside time and space.”

So, anyway, we have our way of organizing time for “normal life” and we need it, if we have to meet someone at 3 o’clock, okay we both have to know what is 3 o’clock, but the part of ourselves where things are happening most powerfully is not associated with these numbers. Psychoanalysts know that our adult sexual relationships are probably almost always driven by what happened when we were, say, 5 years old right? And that is alive and vibrating inside us, the Buddhists always say that past present and future are all co-existent, its obviously true.

Recently I came to Israel and one of my friends from long ago found me, we had not seen each nor talked or written each other for 20 years. This is a very special friend, but anyway, we found each other and it was as if less than 20 minutes had passed, since our last meeting. Twenty years was nothing. Zero.

My characters are located on the level of time and space where intense emotions are existing in an unadulterated state, a state not compressed by ordinary social reality.

I feel very connected to the animal world. The different animals have different energies and powers. I know the Native American Indians in North America were very tuned into this aspect of life, but in our modern life we don’t have so much connection to the animal world, but to me, animals are somehow sacred, they are closer to God than we are, although a friend recently told me “I am God too”, not only this bird, or this tiger, but me, a man. Yes, that’s true too, but somehow we are corrupted by our loss of connection to the sacred. In fact, my films are essentially and ultimately about precisely this loss of connection.

Yes, its what I was trying to say just now. There is a connection, its not feelings or intellect. There is a sacred whirlpool in the area right below or around the heart chakra, between the breasts, at least, a close friend was speaking of this whirlpool this morning and I burst into tears, I felt it was so small in me, and I pray it can become from a tiny little bud stronger and more open. My films are about loss of connection to the spiritual. And the pain that comes from that loss. The alienation in my films is ultimately about that. The spiritual alienation then vibrates on all levels. But that is the root alienation.

Its an image of an incestuous relation. But it’s a dream. Lulu has a dream that shows her what has happened to her on an energetic level…. that all her boundaries, her most private and the most intimate areas of herself, have been invaded and violated in a terrible way. She has to refuse this invasion.

I have a script called HEATSTROKE, and I hope to find the right actresses for it...

It is about two sisters, like PHANTOM LOVE, but it is in color. I am looking for a producer for this film at this time, and I welcome any help or suggestions you might have.

Here is an official little “blurb” about my new film:

HEATSTROKE is a mirage-like mystery set in Los Angeles, California and Cairo, Egypt during the feverish heat of a contemporary summer.The film's root is a violent -- possibly sexual -- early trauma that sits in the psychic closet of two sisters .The film sets the psychic split of the sisters and the violence within their family against the violent split between the Arab world and the West.

I thank you deeply for your understanding and appreciation of my work.
alienation Contemplative cinema ennui interview wordlessness

HarryTuttle said…
Welcome to our new member on the blog, delirious aka Nina Menkes.
August 12, 2008 at 6:03 PM

Unknown said…
I believe your work is excellent in every level!!!!
Wish to work with you!!!
OLYNA XENOPOULOU-actrees-TV presenter ERT[hellenic Radio tv]
Athens/Greece-Facebook
March 25, 2011 at 1:35 PM

HarryTuttle said…
"The films of Nina Menkes have a certain visual element that stems from when she was a young artist, exploring the worlds of dance and photography. Movement and sound have continued to be a central thematic element in her cinematic productions, all of which she writes, directs, shoots, and edits herself. Her latest work, Dissolution, was shot in Yafo, the predominantly Arab area of Tel Aviv, and explores the violence that is so predominant in Israeli society today.
Elvis Mitchell explores the intricacies of Menkes' work -- from violence and death to sound and the connectedness to spirit – which is documented in a captivating retrospective at UCLA's Billy Wilder Theater, through March 7, before traveling to the Anthology Film Archive in New York."