Opening Sequence : The voice of the protagonist, Bo (Pijika Hanzedkarn), is heard without image talking on the phone (pitch black screen). The offscreen conversation carries on over a stationary frontal shot of a wall scattered with photographs of friends, in dim light. We understand that Bo is opening her new cafe soon and invites various long-forgotten acquaintances to the inauguration. The camera pans to reveal Bo through the kitchen door. The long take captures a mundane activity in real time, as she hangs up, looks for the next number, dials again, and repeats her attempt. The mood of the film is set with a simple shot which contains the heart of the drama. Solitude, estrangement, nonchalance and lack of attention.

Bo, in her early twenties, engages in a new life, by starting up her own business. It's the dreaded time when everyone we used to know follow their own path, travel, move abroad, work intensively or found a family. College friends lose touch and begin a solitary life on their own, building a new social network in a new social environment.
Her friends are all there with her on the wall, nostalgic memories, still fresh in her mind, with the frozen smiles and funny faces posed for the camera. But all belongs to a bygone era of carefree entertainment. Now she's alone, desperately seeking for available friends, like a market researcher, to share her joyful pride with. She would like them to launch the word-of-mouth and bring in many customers. Unfortunately the calls we overheard don't seem very successful. She's got more friends on photos than real people in her present life. A sentiment of profound abandonment sinks in, with remarkable restraint, as the shot keeps on running long after the phone calls are over, staring at her walking around in silence. 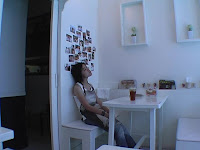 Afternoon Times is a beautiful little film made by students with the most basic production equipment to the greatest effects. The creativity of a sobre mise-en-scene, the daring transcendence of small moments, the mundane poetry... all make it an adorable, melancholic episode suspended in time. The very prototype of the Contemplative Cinema trend. Like a haunting memory revisited intact, stripped of superfluous details, these characters are caught in a strange whirlpool of redundant events. Repetition and variation.
The careful observation of minimal gestures throughout the day recalls Chantal Akerman's film which was one of the most important pioneer of "Contemplative Cinema" : Jeanne Dielman, 23 Quai du Commerce, 1080 Bruxelles (1976). Likewise emphasis is put on body language of non-speaking people. Stationary shots frame the situations in self-contained tableaux, that render the presence of a "surveillance camera" invisible while bringing attention to the private life happening in front of our voyeur eyes. We can see what people do when nobody is looking at them, when they don't have to play a social role in front of someone else. A perspective also featured in the segments of Hou Hsiao-hsien's Three Times (2005). 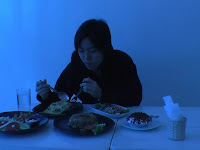 A brownish, darker evening light dominated the introductory shot, a feeling of anxiety and despair caused by the anticipation of her café grand opening. Later, a brighter sunny morning light shines on the film, tinted with a metallic blueish hue celebrating its fresh, acid, melancholic, surreal atmosphere. Congratulations to the cinematographer (Nalina Tungkanokvitaya) who does a wonderful job with natural lighting.

A delivery boy brings a baguette every morning. He's the only person Bo becomes familiar with along her redundant routine. Although their contact is strictly professional, regulated by a polite yet reserved, even timid, etiquette. Without a word he hands over the bread, she gives a banknote, he returns the change. A long trained composure. An automatized ceremonial. 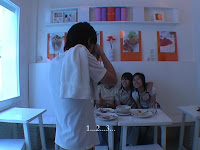 The photographic memorization motif, which structures the entire film, will come as an ice-breaker for them. Upon one of his delivery he's asked to take a picture of her with her friends to immortalize the inauguration of the café. I love this type of microcosmic scenes encapsulating unspoken emotions into insignificant acts, which we find aplenty in Miranda July's Me And You And Everyone We Know (2005) for instance. In this world of lonely disconnected individuals, every little task is an opportunity to meet with somebody else's private sphere and hopefully to step in for an instant in their sealed bubble, if the situation is not too awkward of course. Here, the favor to take a group picture for her becomes a tacit connection. The Polaroid camera is used as a proxy device for interpersonal socialization with a total stranger, like with a lighter or a watch in the street. She asks "Can you take a picture for me?", but what she really means is "Hey, take a look at me please!" 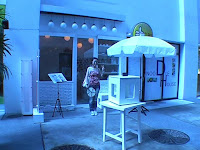 This central theme of self-representation, announced in the opening shot, fully expresses the distanciation of human relationship in today's virtualized world. Without the Polaroid they are confused strangers looking at their feet ashamed of themselves. But hidden behind the camera viewfinder he could lay his gaze upon her. Conversely, under the excuse of posing with her friends, she can show off her largest smile without obviously seeming to seduce him. The self-esteem is preserved for both of them.
Even though they are not aware yet of this blooming romance, the film catches there the pre-historic, founding moment of their future bond. She puts up the Polaroid picture on the wall, with the other pictures. But what it stands for is less the friends we can see on the image than the invisible photographer who took it. 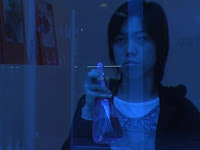 After this defining moment, that will only become meaningful to them and the audience later on, the daily routine and the recurring scenes will unfold according to the slow pace of time flowing by. Careful shots of dish washing, window cleaning, housekeeping in silence and solitude. Times of inner ruminations, patient wait and reverie accompanied by the absorbing melody on a diegetic cassette with classical music. A catchy repetitive soundtrack reminiscent of Kikujiro (1999). Meanwhile the short length of this one music track marks the passage of time, as she has to rewind the cassette manually to repeat the play. Another little task indicative of the actual duration of life moments. Another opportunity for him and her to connect through a common taste for this music. 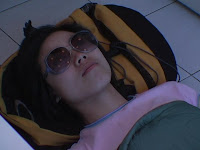 In a funny scene, Bo dresses like a tourist, with sunglasses, backpack, camera, and pretends to visit this splendid café for the first time. She contemplates cautiously every little object decorating the place, with a self-satisfied admiration, projecting into this fictional character the ideal customer she'd like to serve if the turnout wasn't so poor. She then unpacks her sleeping bag on the floor and stares at the ceiling. It's nice to remember a similar scene in Me And You And Everyone We Know when the kids wondered what it would be like if the world was upside down. 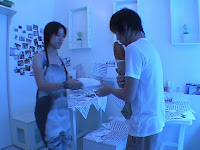 On a rainy day, he's soaked and she gives him a towel. Is it because the light is darker, because the rain pours outside, because the wet clothes wear out the usual respectful distances, or because of this tender gesture showing care? After so many meetings at regular hours for the bread, they seem to look at eachother with different eyes this time. No word spoken yet, no effusion of sentiments. Just a memorable moment shared intimately, the secret happiness of being together. An awkward silence extended indefinitely, planted face to face, which would normally make anybody uncomfortable. Though none of them seems in a hurry to break this tensed silence. They soon return to their lives without uttering a word.

The cassette jams in a bundle and so begins the time without music.

The next visit, surrealism creeps in for a moment of arrested poetry. Within the uncut course of a long take stretching over 6 minutes, they are mysteriously locked inside when he delivered the bread. The locksmith can't even rescue them because rains is still pouring outside. By a welcomed enchantment they are miraculously stuck together for a while. They resolve to wait, and she offers to cook a meal for him. The strange ways of fate has kept them close together for a longer time than their usual commercial transaction. As oddly as it occurred, the temporary spell is broken when he finished his food and the door now opens naturally. He wondered why the habitual music wasn't playing and promises to bring her a new tape. But he doesn't come back the next day, someone else's delivers bread. She paints dozens of childish drawings representing a fish, a horse, a camera (again the motif of self-representation), countless rows of dashes... and a delivery boy with a baguette in a bag. She loses appetite. Her business is running down. She has to move out. The walls are covered with copies of the same drawing of the delivery boy, like the identical frames of a film strip, like a dismantled cartoon. The paintings have replaced and covered up the photos on her wall. A new medium of representation illustrates the memories of her second life, leaving the photos behind.

Another uncut long take runs for nearly 15 minutes for the second last scene. In one plan sequence the whole set is packed into boxes, just like if the shooting was over, she clears the borrowed premises, helped by a friend. All drawings are picked up one by one, all pictures, and decorative objects. When he asks why she paints, why she takes pictures, she replies "to kill time", "no particular reason" to futher burry her feelings and regrets...
We realize that life is like a movie production, good times are like afternoon times, they last only a while and then we have to move on and get over them. Memories fit in a little box.

The closing shot, brings back the music in the film, after a long silent shot onboard a taxi, showing a close up of her disillusioned face. Her music, their music, re-appear in non-diegetic form, as if the cassette was playing in her mind, and puts a gentle smile on her face. The film considers the archiving of vain memories, as well as the unconscious, intangible making of important ones. The smallest moments of life we never pay attention to, which slam back in our mind when the loss become more sensible. This is a delicate and touching expression of the construction of our sentimental personality.
(Cross-posted from Screenville)
Contemplative cinema